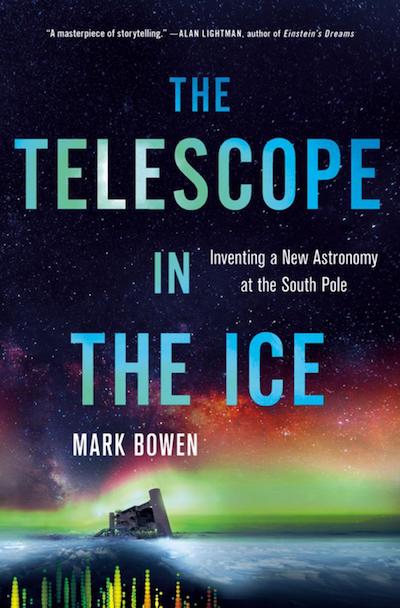 The Telescope in the Ice: Inventing a New Astronomy at the South Pole, by Mark Bowen

Synopsis: The Telescope in the Ice is about the building of IceCube, which Scientific American has called the “weirdest” of the seven wonders of modern astronomy. It’s the inside story of the people who built the instrument, the mistakes they made, the blind alleys they went down, the solutions they found, their conflicts, and their teamwork. It’s a success story.

Located at the U. S. Amundsen-Scott Research Station at the geographic South Pole, IceCube is unlike most telescopes in that it is not designed to detect light. It employs a cubic kilometer of diamond-clear ice, more than a mile beneath the surface, to detect an elementary particle known as the neutrino. In 2010, it detected the first extraterrestrial high-energy neutrinos and thus gave birth to a new field of astronomy.

Aside from being a telescope, IceCube is the largest particle physics detector ever built. Its scientific goals span not only astrophysics and cosmology but also pure particle physics. And since the neutrino is one of the strangest and least understood of the known elementary particles, this is fertile ground. Neutrino physics is perhaps the most active field in particle physics today, and IceCube is at this forefront.

This book is mainly about people and the thrill of the chase: the struggle to understand the neutrino ever since it was “invented” by the extraordinary Wolfgang Pauli in 1930, the early researchers who helped understand it, the strange things it taught them about the nature of space and time, and the pioneers and inventors of neutrino astronomy.

Hardcover Edition: The Telescope in the Ice: Inventing a New Astronomy at the South Pole

Kindle Edition: The Telescope in the Ice: Inventing a New Astronomy at the South Pole