The winners of the 2015 DeBary Outstanding Children’s Science Book Awards were recently announced:

The following books cover the winners and those that were nominated. I have covered some of the books previously, but will endeavour to feature them all in the coming weeks. Check out the DeBary website for more information.

The following comments were made by the judges of the DeBary Awards.

This book won us over because we wanted to do some of the activities, like making our own pH paper or butterfly feeder.  The scientific explanations are generally cursory and sometimes unclear (as in the crystal-making activity or the aerodynamics of paper airplanes).  Some, particularly the food-related ones, have useful explanations of the physics of salad dressing, meringues, and ice cream.

Bones: Skeletons and How They Work (2015 Winner, APS DeBary Award), by: Steve Jenkins

This is the perfect picture book for younger children: the illustrations are outstanding, and many concepts about bones like comparative anatomy and weight-bearing are covered in delightful ways.  Plus: DINOSAUR BONES.

How the Weather Works – A hands-on guide to our changing climate, by Christiane Dorion and illustrated by Beverley Young

We adored this book—it has pop-up explanations of hurricanes and thunderstorms, all beautifully designed, with good text explanations of various weather phenomena. However, we sadly suspect it is a pop-up book for adults more than for children; you decide.

The Nature Explorer’s Handbook – How to make friends with snails and other creatures, edited by Karen Rigden and illustrated by Fabio Santomauro

This is a nature handbook for younger children, and it has lots of blanks to fill in as children do the activities, most of which can be done whether the child lives in the country, suburb or city. Our test children liked it.

This is a science-filled, gore-filled unsentimental look at sharks. It will be good for children not bothered by a lot of blood red in the nice watercolor illustrations. 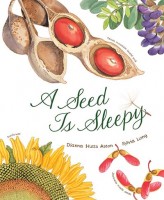 While more scientific than the title suggests, with many seed facts included, this was not a science book. We questioned the cursive script that we adults had trouble reading and the insistence that seeds had emotions. Very nice illustrations of a huge variety of seeds. 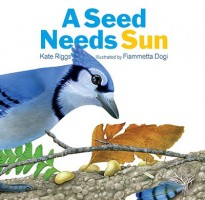 A Seed Needs Sun, by Kate Riggs and illustrated by Fiammetta Dogi

This is a picture book for very young children, and the cross-sectional pictures of the world of soil, with seeds, earthworms, moles, and grubs were delightful. The declarations are not scientific, however. Most seeds don’t “need” sun. We don’t want to have a discussion of dark-induced dormancy with a 3-yr-old.

Beetle Busters – A Rogue Insect and the People Who Track It (2015 Winner, APS DeBary Award), by Loree Griffin Burns and photographs by Ellen Harasimowicz

This book about Asian Longhorn beetles really captures how scientists try to solve a problem like the introduction of a devastating invasive insect to US forests, and is perfected aimed at an audience of 4-7th graders.

This is a nature handbook for older children, with (as befits the Brooklyn Botanical Garden) a huge effort to make it equally engaging to city kids.

This is a dense book covering many epidemics: the great plague of 1665, the cholera outbreak of 1854, yellow fever in 1900 Cuba, typhoid fever in 1906 New York, the Spanish flu of 1918, ending with ebola and AIDs. It’s an ambitious book, and a busy one, with many inserts and sidebars. It may be too difficult for some children, but engross others.

The first half is a story of coral symbionts trying to help their host survive a warming event in the coral reef. The second half is a cheat sheet (for parents or precocious children) on the science behind the story. The story is charming and the illustrations superb, but we had trouble imagining the children for whom this book was intended: we weren’t that precocious ourselves. If your child is, this book might be a favorite.