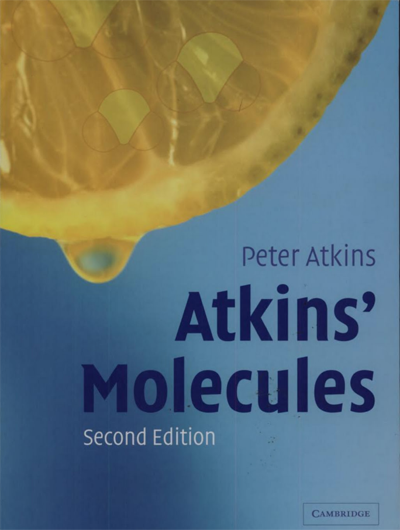 Synopsis: Originally published in 2003, this is the second edition of a title that was called ‘the most beautiful chemistry book ever written’. In it, we see the molecules responsible for the experiences of our everyday life – including fabrics, drugs, plastics, explosives, detergents, fragrances, tastes, and sex. With engaging prose Peter Atkins gives a non-technical account of an incredible range of aspects of the world around us, showing unexpected connections, and giving an insight into how this amazing world can be understood in terms of the atoms and molecules from which it is built. The second edition includes dozens of extra molecules, graphical presentation, and an even more accessible and enthralling account of the molecules themselves.

Mini-bio: Peter Atkins is an English chemist and former Professor of Chemistry at the University of Oxford and a Fellow of Lincoln College. He is a prolific writer of popular chemistry textbooks, including Physical Chemistry, Inorganic Chemistry, and Molecular Quantum Mechanics. Atkins is also the author of a number of popular science books, including Atkins’ Molecules, Galileo’s Finger: The Ten Great Ideas of Science and On Being.

This is the book that all chemists wish they had had the idea of writing and it is certainly the one that changed my way of thinking. Crisply written, with a clarity and communication to which I can only aspire. The second edition (Peter Atkins, Atkins’ Molecules, Cambridge University Press, 2nd edition, 2003) is much more up to date, with a number of “new” molecules like Viagra, but is also harder to come by – there are lots of the 1st edition going second-hand. – From 10 Great Books on Chemistry 2