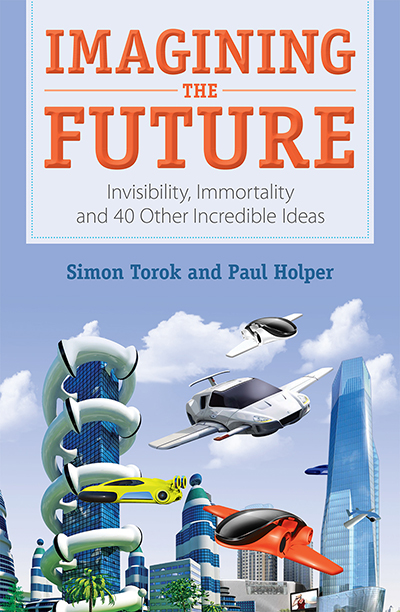 Imagining the Future: Invisibility, Immortality and 40 Other Incredible Ideas, by Simon Torok and Paul Holper

Get prepared for the fantastic future with this guide to the unbelievable and incredible inventions just over the horizon.

Invisibility, instant transportation, holograms and lots of gadgets were once the dreams of science fiction … now they might become science fact! Imagining the future is the first step in arriving there. If you can dream it, perhaps one day you can invent it.

Strap yourself in and get ready for the future!

Mini-bio: Simon Torok loves science. Most of his work has involved communicating the importance of science in our lives and its role in understanding the climate. He has worked at CSIRO as a science communicator and as editor of The Helix and Scientriffic magazines. He has also worked as a climate change communicator at the Tyndall Centre for Climate Change Research in England, and performed with the ANU-Questacon Science Circus doing shows for people around Australia. He has a PhD in climate change and qualifications in science and science communication. – CSIRO Publishing

Mini-bio: Paul Holper has a passion for technology. He has made a career out of explaining the value and excitement of science and its applications. During 25 years at CSIRO he managed a large environmental program, and was a professional science communicator. Before that he was a secondary school science teacher. Throughout his career, Paul has popularised science through books for children and a general readership. He has a degree in chemistry and qualifications in education and science communication. – CSIRO Publishing