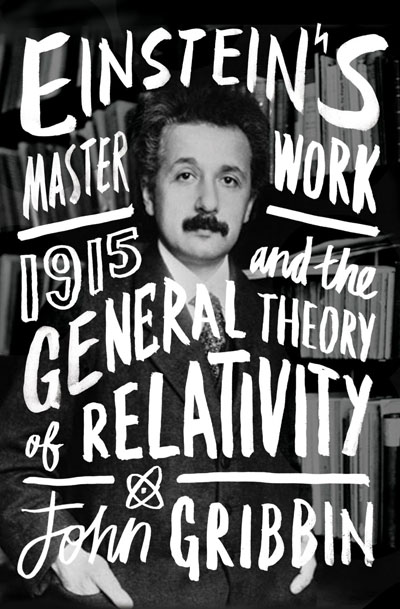 Einstein’s Masterwork: 1915 and the General Theory of Relativity
By John Gribbin

One hundred years ago Albert Einstein presented to the Prussian Academy of Sciences a remarkable series of lectures. In a furious burst of creativity these four lectures, delivered one week apart starting on November 4 1915, were developed in instalments, culminating in his final lecture, titled “The Field Equations of Gravitation”. With this the General theory of Relativity was essentially complete. At the age of 36 Einstein had just changed our world-view of the universe more profoundly than anyone, with the possible exception of Newton.

In Einstein’s Masterwork, John Gribbin, proposes that the year 1915 was Einstein’s most momentous year. Gribbin takes us neatly through Einstein’s life: from his childhood, through schooling, life in Switzerland, marriage, the annus mirabilis of 1905, up to the 1915 lectures and subsequent 1916 publications, and their legacy. Gribbin concludes his book with a brief chapter of Einstein’s life post 1916.

This book is aimed at the popular market, and in this it succeeds admirably. Gribbin’s language is clear and non-technical. The book, as expected from John Gribbin, is accurate and suitably and lightly referenced, sufficient to encourage further reading without distracting from the flow of the narrative. At 200 odd pages it is a tantalising entry into the history of science. Gribbon’s passion for science communication shines clearly throughout. John Gribbin is a prolific writer of popular science books. After completing a PhD in astronomy at Cambridge he worked for the journals Nature and New Scientist. Since then he has concentrated chiefly on writing books.

This present book contains no new revelations on Einstein’s life and work. Gribbin does a commendable job in condensing 36 years of Einstein into a scant 135 pages. At the time of reading I was annoyed that it took that long to get to the General Theory. Far more time was dwelt on the year 1905, 67 pages, in which Einstein published four ground-breaking papers: computing Avagadro’s number from the properties of sugar solutions (his doctoral dissertation), demonstrating the reality of atoms and molecules through Brownian motion, the photoelectric effect (for which Einstein was awarded the 1922 Nobel Prize), and finally the Special theory of Relativity. In the end it may only be physicists and sci-fi fans who will agree that 1915 was more momentous than 1905. This outcome, either way, does not detract from what is an entertaining and educative book.

For more detailed and insightful biographies then Einstein: a life by Denis Brian is recommended. For those more comfortable with science and wanting to deeply appreciate Einstein’s scientific contribution, then Subtle is the lord by Abraham Pais, is a must read. For those who want extra insight and detail on Einstein’s 1916 paper The Foundation of the General theory of Relativity then the recently published The Road to Relativity by Hanoch Guttfreund and Jürgen Renn is worth chasing down. This latter book includes a reproduction of Einstein’s handwritten, annotated, manuscript (plus an English translation).

Gribbin’s book is a great popular introduction to the thoughts and life of Albert Einstein as he undertook one of the great intellectual voyages. For a reader fascinated by gravity, the shape of the universe or where black holes were first thought of – then Einstein’s Masterwork is a great place to begin.

Kevin Orrman-Rossiter is a freelance science writer and reviewer. His writing has features in COSMOS magazine, Books&Publishing, and online on Australian Science lucid thoughts and dragon laughing . Originally studying physics, Kevin had a successful research career, reaching the heady heights of an ARC Queen Elizabeth II Fellow, then after being lured into the fascinating world of industry research, he ended up some years later, in marketing and strategy. When not writing, reviewing, or reading books to review, Kevin is now found; forming links between Australian industry and researchers at the University of Melbourne, reading (what a lovely quaint term) History & Philosophy of Science at University of Melbourne, and, in defiance of ageing