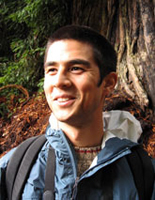 Jason grew up in a small town in New Hampshire, and studied illustration at Syracuse University.  In 2001 he moved to New York City and found a job at a children’s bookstore in Manhattan.  It was through co-workers at the store that Jason found his way to his current publisher, Roaring Brook Press. – From Jason’s Homepage

I made Redwoods when I lived in New York City.  I rode the subway every day to work (at a children’s bookstore) and one day I was reading an article in a magazine about Redwood trees and the scientists that study them.  The article sparked my imagination — I started to day dream about exploring the canopy and when I got home I started doing more research and eventually made a book dummy.

#2 – The book itself has a magical reality quality about it. Was this something you were trying to convey in your book?

To do research for the book, I went to California and camped in the Redwood forest.  The forest was absolutely breathtaking, more impressive and magical than I had ever imagined.  It has an ancient and otherworldly feel to it.  Around every bend in the trail, I half expected to see a dinosaur appear.  This is something I really wanted to capture in the book.

He is sort of based on myself, although he doesn’t look like me very much.  He’s curious, has a good imagination and loves adventure, which are qualities that I had as a kid (and still do, I think).

#4 – The book is filled with luscious images of the redwood forests. How did you do your research for this book? Both visually and in terms of the information contained within?

For the facts, I read books and did a little research online.  When I do online research it’s mostly to get an overview of the subject and I usually try to corroborate the information with a second source if I’m going to include it in the book.

For visual research I went to Jedediah Smith State Park in California, where there are many stands of old growth redwoods.  This was indispensable for making the illustrations, as I mentioned above.  On site, I take lots of photos and I also draw and paint.  I wasn’t able to go into the canopy, so for those pictures I had to rely in images from researchers at the University of California Humboldt.

Yes.  This April, my next book GRAVITY will be out.  You can see the cover on my website:http://jasonchin.net/

And I’m currently illustrating a book about the water cycle, called WATER IS WATER, which will be out the following Spring.

One thought on “Science Book a Day Interviews Jason Chin”