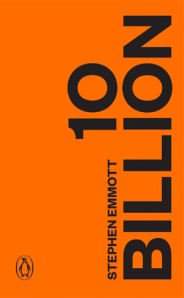 Synopsis: Ten Billion is Stephen Emmott’s shocking message showing why time is running out for humanity unless we radically change our behaviour – now

By the end of this century the population will be over 10 billion. And there aren’t enough resources for everyone.

This book won’t tell you to ‘do your bit for the environment’.

It won’t tell you to recycle.

It won’t tell you to buy an electric car.

It’s too late for that.

Stephen Emmott, the acclaimed scientist, shows us why time is running out. And what we really need to do about it.

10 Billion (the book) is based on a one-man stage show by Stephen Emmott. – @popsciguyoz