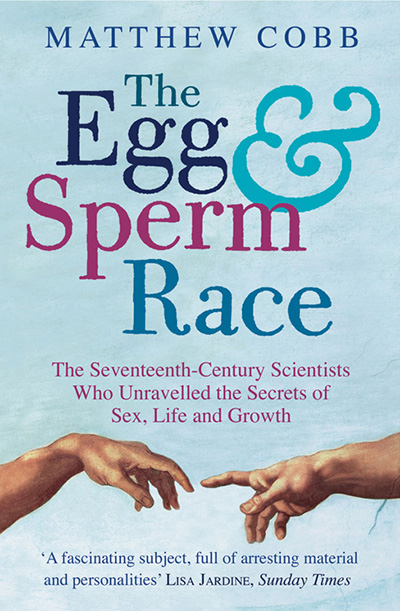 The Egg & Sperm Race: The Seventeenth-Century Scientists Who Unravelled the Secrets of Sex, Life and Growth by Matthew Cobb

Synopsis: Where do we come from? For thousands of years we really had no clue how living things were created — great thinkers like Aristotle and Plato had attempted to explain what became known as the problem of ‘generation’, but neither really had the tools or the insight to solve the mystery. The result was a wealth of weird and wonderful ideas about the components necessary to create new life — blood, ‘vapours’, strange pulses in the air. It was also widely accepted that animals could breed different species; the notion that two sheep can only make another sheep is a surprisingly modern idea. But all this confusion changed in a flurry of discovery in the mid-seventeenth century. In just a decade, a group of young scientists in Europe established the existence first of the human egg and then of the human sperm. At last, the building blocks were in place — although, in one of the great ironies of science, it would be another 150 years before someone worked out how fertilisation actually took place. Focusing on the personalities and rivalries of this extraordinary period, Matthew Cobb has shed new light not just on an under-reported story of science but on our very nature — and how little we still know about one of the greatest miracles of Nature.

Mini-bio: Matthew Cobb is Professor of Zoology at the University of Manchester where his research focuses on the sense of smell, insect behaviour and the history of science. His books include The Egg & Sperm Race and acclaimed accounts of the French Resistance during the Second World War and the liberation of Paris in 1944.
Author’s Twitter: https://twitter.com/matthewcobb

I am principally a historian of the mathematical sciences, meaning in the first instance mathematics, physics, astronomy, cartography, etc., but I try not to become too narrow in my outlook and buy and read books about the history of other branches of science technology and medicine. One such book is Matthew Cobb’s The Egg & Sperm Race: The Seventeenth-Century Scientists Who Unravelled the Secrets of Sex, Life and Growth. I’m quite happy to admit that I bought this book originally because of the lovely pun in the main title but never regretted for one second having bought it. This is an excellent, beautifully written, easy to read account of seventeenth-century (and beyond) biology from which it is possible to learn an incredible amount in just three hundred fascinating pages. I’m very proud of the fact that a couple of years after I bought and devoured this book, Matthew and I became good Internet friends. I’m looking forward very much to his next book on the history of the discovery of DNA, due out in 2015, I’m certain it will be just as good. – From 10 Great History of (European) Science Books and more

Paperback Edition: The Egg And The Sperm Race