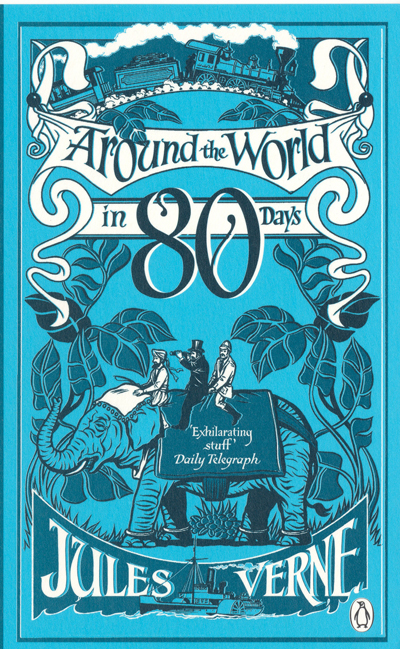 Around the World in Eighty Days by Jules Verne

Synopsis: Taking up a challenge from his whist partners, a mysterious English gentleman named Phileas Fogg wagers half his fortune and abandons his quiet domestic routine to undertake a daring feat: to circle the globe in a mere 80 days, an achievement unheard of in the Victorian world.

Fogg and Passepartout, his devoted manservant, avail themselves of virtually every known means of transportation in their wild race against time. All the while, a devious detective dogs their every step and introduces fresh obstacles. The resourceful Fogg faces each new trial with unshakable aplomb, through a constantly shifting background of exotic locales — from the jungles of India, a Chinese opium den, and a Japanese circus to a full-throttle train ride under attack by Sioux and a bloodless mutiny aboard a tramp steamer.

The most popular of Jules Verne’s fantastic adventure stories, Around the World in Eighty Days first appeared as a newspaper serial in 1872, much to the delight of a world already agog with recent advances in technology. Its enduring blend of comic misadventures and thrilling suspense continues to enchant generations of readers.

Mini-bio: Jules Verne is generally considered a major literary author in France and most of Europe, where he has had a wide influence on the literary avant-garde and on surrealism. His reputation is markedly different in Anglophone regions, where he has often been labeled a writer of genre fiction or children’s books, not least because of the highly abridged and altered translations in which his novels are often reprinted. Verne is the second most-translated author in the world since 1979, between the English-language writers Agatha Christie and William Shakespeare, and probably was the most-translated during the 1960s and 1970s. He is one of the authors sometimes called “The Father of Science Fiction”, as are H. G. Wells and Hugo Gernsback. – Wikipedia