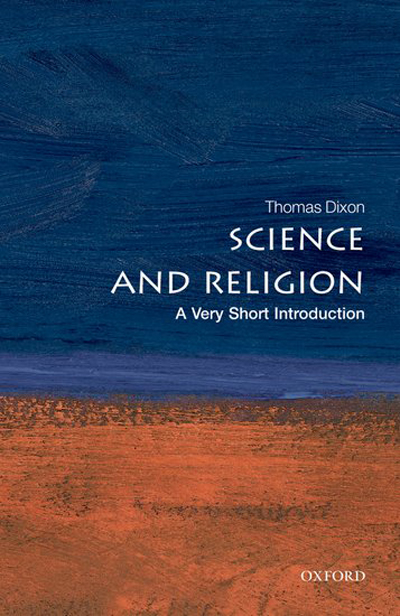 Science and Religion: A Very Short Introduction by Thomas Dixon

Synopsis: The debate between science and religion is never out of the news: emotions run high, fuelled by polemical bestsellers like The God Delusion and, at the other end of the spectrum, high-profile campaigns to teach “Intelligent Design” in schools. Yet there is much more to the debate than the clash of these extremes. As Thomas Dixon shows in this balanced and thought-provoking introduction, a whole range of views, subtle arguments, and fascinating perspectives can be found on this complex and centuries-old subject. He explores the key philosophical questions that underlie the debate, but also highlights the social, political, and ethical contexts that have made the tensions between science and religion such a fraught and interesting topic in the modern world. Dixon emphasizes how the modern conflict between evolution and creationism is quintessentially an American phenomenon, arising from the culture and history of the United States, as exemplified through the ongoing debates about how to interpret the First-Amendment’s separation of church and state. Along the way, he examines landmark historical episodes such as the Galileo affair, Charles Darwin’s own religious and scientific odyssey, the Scopes “Monkey Trial” in Tennessee in 1925, and the Dover Area School Board case of 2005, and includes perspectives from non-Christian religions and examples from across the physical, biological, and social sciences.

Mini-bio: Thomas Dixon is Lecturer in History at Queen Mary, University of London. A member of the International Society for Science and Religion and an expert on modern intellectual history, he writes regularly for the Times Literary Supplement, and has published books about the history of psychology and about Victorian moral philosophy. – OUP Bio