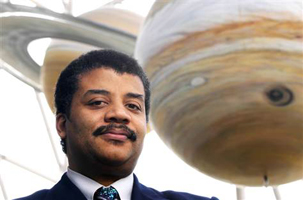 Special thanks to Neil deGrasse Tyson for answering 5 questions about his recently featured book – Space Chronicles: Facing the Ultimate Frontier

Neil deGrasse Tyson was born and raised in New York City where he was educated in the public schools clear through his graduation from the Bronx High School of Science. Tyson went on to earn his BA in Physics from Harvard University and his PhD in Astrophysics from Columbia University. Tyson’s professional research interests are broad, but include star formation, exploding stars, dwarf galaxies, and the structure of our Milky Way.  – Adapted from Neil’s Homepage

#1 – What was the impetus for writing Space Chronicles?

I had written so much on the subject and given so may well-received talks to the public, to politicians, to space enthusiasts, and to captains of industry that I felt it was time to collect the ideas into one volume

#2 – What is the future of space travel and exploration?

I remain unconvinced that the private sector can lead a space frontier.  The space frontier is expensive, dangerous, and carries unquantified risks.  These three conditions generally preclude one’s ability to establish a capital markets valuation of the enterprise.  Industry could do it as a one-off stunt.  Or via lottery.  But that’s not anybody’s concept of a space frontier industry.

Governments, with long-term vision statements – much longer than timescales associated with corporate annual reports — need to lead the frontier.  When the frontier is breached, the routine or well-tested activities get farmed out, or handed over to private enterprise, who, presumably, can o the same tasks more efficiently and for less money.

#3 – You talk about the US falling behind other countries in terms of technology and education. What do you think are the reasons for this?

We’ve gotten fat and lazy.  Taking previous investments for granted.  Reciting to ourselves that we are the best, knowing it was once true, but no longer verifying the claim.

#4 – What are three things that can be done in the US that can improve people’s attitudes to science?

At the risk of sounding self-serving, Cosmos was conceived and created to do just that.

#5 – Who have you written this book for? What is its take-home message?

For everyone who doesn’t know why we should be in space, and for all those who think they know the reasons why we are not.

FYI:  the submitted title for the book was:  “Failure to Launch:  The Dreams and Delusions of Space Enthusiasts”. The publisher urged it be changed due to the negative outlook it conveys.