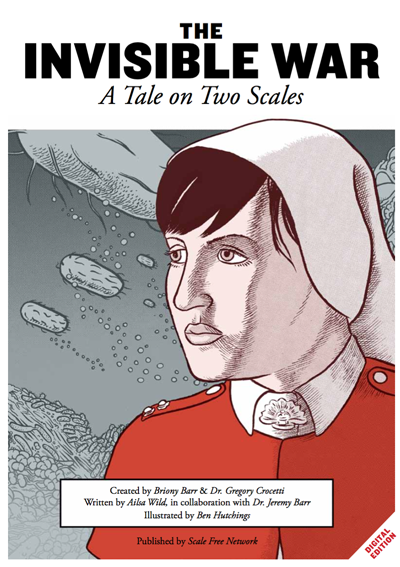 Dorion Sagan Reviews The Invisible War: A Tale of Two Scales by Alisa Wild and illustrated by Ben Hutchings

Graphic Life – A Review of The Invisible War: A Tale of Two Scales

As a fan of Tintin, Asterix and the great 20th century comic book storytellers Robert Crumb (who almost single handedly invented underground comics in the 1960s and illustrated Janis Joplin’s album cover for Cheap Thrills), Peter Bagge (e.g. Woman Rebel: The Margaret Sanger Story), Dori Seda (who, like Crumb, likes to depict herself and can be considered in an essentially literary lineage of confessional fiction that includes novelists Knut Hamsun, John Fante, Charles Bukowski and, in this century, Karl Ole Knausgaard), and Art Spiegelman (who won a Pulitzer for Maus), I can without reservation recommend the fantastic new hypertext The Invisible War: A Tale on Two Scales. The brainchild of Briony Barr and Dr. Gregory Crocetti, whom I had the pleasure of meeting July 2015 in Lisbon at the 8th Congress of the International Symbiosis Society, with brilliant writing by Ailsa Wild in collaboration with Dr. Jeremy Barr, and wonderful illustrations by Ben Hutchings, it differs from the main corpus of the previous writers in presenting something that is far more than a personal story. But it does that, too.

In fact The Invisible War breaks ground on so many fronts (to use a metaphor whose military origin and more-than-military depths these authors and illustrators make visible) as to make it a candidate for the first truly modern, 21st century graphic novel. Not to say comic book, for it is much more than that. Beginning with a definition of “symbiosis,” and the negotiator’s proverb “the enemy of my enemy is my friend” (not to be confused with the jealous lover’s “the friend of my friend is my enemy”), the electronic edition (there is also a pure graphic novel) proceeds from cover of heroine Sister Annie Barnaby to instructions on “How to Interact with this Digital Novel.” Along with page numbers there are circled numbers that, clicked on, take one from the graphic novel proper (pp. 1-67) to an almost-as-long (pp. 69-116) encyclopedic section illustrated with comics, graphics, photographs and external web links. These expand greatly on the information delivered on the story, with emphasis on WWI and Australian history, geography of the Western Front and, most importantly, the fascinating, relevant to everyone, rapidly developing status of medical microbiology and the human microbiome.

If Vladimir Nabokov, the lepidopterist and novelist, aesthetically underscored that a good novel must succeed on three fronts: 1) telling a story, 2) providing information, and 3) enchanting, the authors of The Invisible War: A Tale of Two Scales triumph wonderfully. One can hardly think of a more captivating tonic to confer knowledge, create empathy, and spur thought on the themes explored – history and the role of women, the heroic role of medics and the tragic inauguration of humans into planetary conflagration in the early 20th century—a fire whose embers continue to be stirred—and, perhaps most importantly, the epic scientific discovery of the role of microbes and earlier—indeed ancestral—forms of life in our understanding of ourselves as more-than-human beings.

Truth is stranger than fiction and scientific truth is stranger than science fiction. Far from being “settled,” as textbooks and pharmacy companies (fabulously wealthy but worried to death that their sometimes deadly money-making decisions will be found out) falsely suggest, science is an ongoing, ever-curious, amazing (and here the graphic collaborators hit the crucial Nabokovian note of enchantment) human enterprise. Once upon a time life was thought to have been begun by a humanoid Creator. The sudden appearance of maggots from meat and other observed phenomena suggested “spontaneous generation,” the supposed natural transformation of decaying organic matter into new life forms. Careful observations with closed and open laboratory flasks showed it was not so. Pasteur and company showed that life came from previous, albeit subvisible life—“germs.” But this discovery, so crucial for the understanding of much sickness as the result of infectious disease (rather than the demons diagnosed by the excorcists et al of the plague-ridden middle ages), held back evolutionary understanding. At the limit, the discovery that life comes only from previous life reinforces the childish belief that humans were especially created by a single, all-powerful white-bearded supernatural celestial giant, marked by patriarchal hypocrisy and childish temper tantrums, and invoked by leaders of nations at war. (Of course, this figure still floats burningly in the space of culture—e.g. “God bless America” at the end of presidential addresses—like a malignant halo no less than the still-quite-sparkable embers of our species’ recent World Wars.) And despite its initial great efficacy in combatting illness, Louis Pasteur’s germ theory of disease also set back evolutionary theory—by discarding, as part of the baggage of dogma that quickly threatens to trail in the wake of thrilling scientific discovery, the ur-scientific notion that life, rather than having been created, could have evolved—for example on Earth itself, some four billion years ago in the Archean Eon. (Although to my mind certainly not his best, Robert Crumb’s Genesis, a re-telling of some aspects of the beginning of the Bible, is by far his best-selling comic. I herewith hope—I won’t say pray—that the brilliant team of Barr, Crocetti, and company at Scale Free Network, publishers of The Invisible War, consider life’s symbiosis-rich evolution as a future graphic novel!)

Information mounts and time passes but knowledge sometimes stalls. Once upon a time—a couple of thousand years before monotheism made its viral spread and bloody tracks—Empedocles, the pre-Socratic, held that Earth life began with organs that sometimes merged, and that the offspring of some survived while others did not. Here we have, with the sort of historical precocity for which the ancient Greeks are famous, the fundaments of both symbiosis (interspecies alliance and merger) and natural selection (differential reproduction). However, Aristotle, “the first biologist,” though he groks natural selection, dismisses it because Empedocles associates it with the sort of wild interbreeding of beasts and transmuting gods that he—applying Plato’s penchant for categories to the real world—was trying to get away from. And in a further historical irony, Darwin, who mentions Aristotle’s mention of natural selection in early editions of On the Origin of Species, claims that the philosopher’s impoverished understanding of it can be gauged by him mentioning it in connection with Empedocles.

Now we know, in the most thrilling interactive exposition of the reality of the microbiome, the immune system, and medical microbiology that I have ever seen, that “we” contain trillions of cells that belong to other species. The idea of the human as an independent, special species is being erased as we speak. Pasteur’s germ theory of disease—still important to our understanding of disease, and perhaps even more so to the profits of pharmaceutical companies, vaccine makers, and global governmental health organizations—is giving way to something more sophisticated, more real. There is far more to life than dreamt of by the drug dealers. The prehistorical alliances and battles of cells of different species blow away the fights and truces of recently evolved human beings, who are indeed largely the evolutionary result of such epic skirmishes and multispecies power grabs. Some bacteria are crucial to our health, producing B and K vitamins, and synthesizing serotonin, as the authors of The Invisible War point out. Canine distemper virus keeps HPV, human papilloma virus connected with cervical cancer, in check. Viruses, the “dark matter” of life, keep other viruses and potential threats in check. This is especially true of bacteriophages, happy in the mucus of the intestine, from which they can be deployed to kill killer bacteria—and which are heroes no less than the Australian nurses in Crocetti, Barr and company’s killer book. Other viruses, the connection first being found in sheep, are needed for placental attachment in mammals. The cells of our body, the mitochondria which metabolize energy for us when we breathe, come from bacteria. We are not what we thought we were, we are mutualist processes, temporary conjunctions, three-dimensional flow forms made of mixed species beyond dreaming but graphically displayable in The Invisible War: A Tale of Two Scales. The scales of course are WWI, at the Western Front (a map early on helpfully guides us), marked by trench warfare. In a sort of fractal stroke of genius, the authors and illustrators relate the digging in of humans to kill each other for the sake of nations with the invaginations of intestinal spaces colonized by dysentery, a deadly variety of which killed soldiers by the tens of thousands from within even as their larger fellow beings were killing them from without. The unlikely bacteriophage virus heroes of the graphic novel make this not only a war story but a fascinating, graphic, educational glimpse into the multiple living worlds that sustain us—and which cutting-edge science continues to reveal at a breakneck speed too fast for institutions—but not, apparently, for Scale Free Network’s comic book readers—to assimilate.

Dorion Sagan  is an award-winning author and ecological philosopher whose writings have appeared in Cabinet, Wired, The New York Times, The New York Times Book Review, The Skeptical Inquirer, Natural History, The Smithsonian, Pabular, and The Sciences. He is author or co-author of thirty-odd books translated into some thirteen languages. His What is Life? was called “A masterpiece of science writing” in Orion magazine, and included on an all-time list of “100 Mind-Altering Masterpieces” by Utne Reader. His latest co-authored book (out June 2016), called Cracking the Aging Code—The New Science of Growing Old and What it Means for Staying Young, argues that genetically timed aging has been naturally selected to protect species from overpopulation.

4 thoughts on “Dorion Sagan Reviews The Invisible War: A Tale of Two Scales”