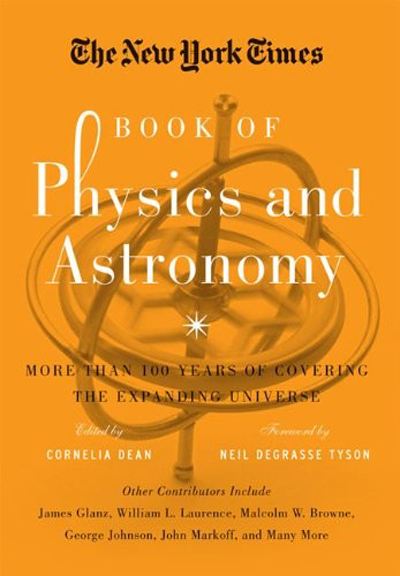 The New York Times Book of Physics and Astronomy: More Than 100 Years Covering the Expanding Universe, Edited by Cordelia Dean

Synopsis: From the discovery of distant galaxies and black holes to the tiny interstices of the atom, here is the very best on physics and astronomy from the New York Times! The newspaper of record has always prided itself on its award-winning science coverage, and these 125 articles from its archives are the very best, covering more than a century of breakthroughs, setbacks, and mysteries. Selected by former science editor Cornelia Dean, they feature such esteemed and Pulitzer Prize-winning writers as Malcolm W. Browne on teleporting, antimatter atoms, and the physics of traffic jams; James Glanz on string theory; George Johnson on quantum physics; William L. Laurence on Bohr and Einstein; Dennis Overbye on the recent discovery of the Higgs Boson; Walter Sullivan on the colliding beam machine; and more.

Mini-bio: Cornelia Dean is a distinguished lecturer and writer-in-residence at Brown. She is best known as a science journalist at The New York Times, where she still writes and was science editor between 1997 and 2003. She began her newspaper career at The Providence Journal. Her first book, Against the Tide, was published in 1999 by Columbia University Press. – Metcalfe Institute