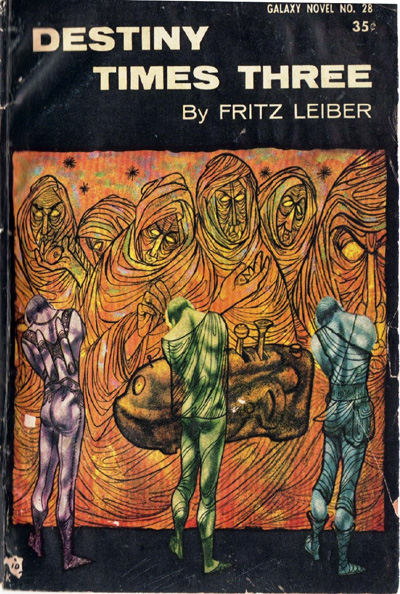 Synopsis: How can Thorn fight a dream foe — risking life and sanity, that is exactly what he sets out to do . . . and his shrewd tactics and reckless daring create a pulse-hammering story against an all to real opponent!

Mini-bio: Fritz Reuter Leiber, Jr. was an American writer of fantasy, horror, and science fiction. He was also a poet, actor in theater and films, playwright and chess expert. With writers such as Robert E. Howard and Michael Moorcock, Leiber can be regarded as one of the fathers of sword and sorcery fantasy, having coined the term. – Wikipedia

Full of nerve, verve, and an an abundance of em dashes, Leiber’s 1945 Astounding serial, Destiny Times Three, blends Nordic myth, Persian poetry, and a little bit of Wells into a multiverse story that explores a provocative moral question: What would you do if you found out your multiverse twin exists in a miserable dystopian universe and they resent you for having the better life? Written on the tail end of WWII, Leiber’s tale is more than a little perceptive when read in a Cold War context, and his critique of “The Great Man” theory of history is a rare moment of humility in 1940’s pulp SF. Leiber is hit-and-miss for me– he is often ill-equipped for his reckless New Wave button-pushing, and his sword-and-sorcery stuff bores me to tears– but DT3 is nothing short of brilliant. – From 10 Great Books on Science Fiction 4