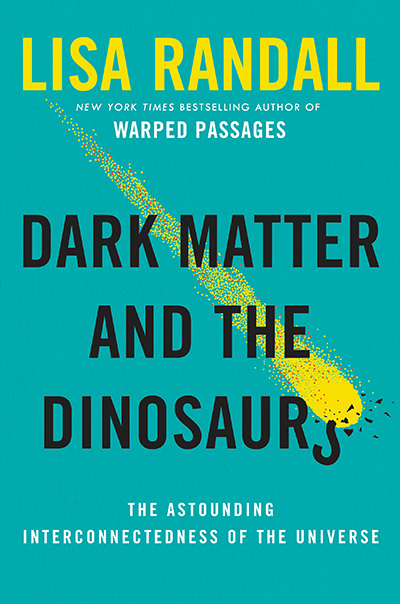 Dark Matter and the Dinosaurs: The Astounding Interconnectedness of the Universe
By Lisa Randall

Have you ever looked up at the night sky and been struck with how small our existence is, in both the vast magnitude of space and the small amount of time humanity has spent here? It’s not an idea that’s in the forefront of our minds most of the time, but Dark Matter and the Dinosaurs brings it home. We’re an unlikely combination of factors, in a small corner of the universe, and we’re absolutely remarkable. Lisa Randall takes us through why that is in this book with her down-to-earth writing style, describing the evolution of the cosmos, mass extinctions, and everything in between.

Dark Matter and the Dinosaurs is Lisa Randall’s third full length book, and discusses her most recent research into the potential for a thin dense disk of dark matter within our galaxy. Dark matter is a type of matter that doesn’t interact with ordinary matter. We can’t see it, and as far as we know, it only interacts with ordinary matter through gravity.

Randall’s contention is that this disk is the cause for regular bombardments of Earth with various forms of space rock – and potentially, the surprising regularity of mass extinctions. It is this theory that titles the book. To say the point of the book is to communicate that theory would be doing it a disservice. The book isn’t about dark matter, or even the dinosaurs, but rather everything that lead up to the point where we could try and link them together.

Randall’s strength in writing has always been in the human aspect of science – an aside about a conversation she had at a wedding, stories of the scientists behind these discoveries, and the analogies she uses. This grounds the story she is telling, and Randall can certainly tell a story.

The sections about Walter Alvarez, the geologist who first proposed the theory that the dinosaurs were killed by an asteroid, are gripping and difficult to put down as Randall tells the story of the mounting evidence and eventual acceptance of the theory. However, it’s also noticeable when this grounding in human stories is missing. There are a few sections that can be quite hard going, and shouldn’t be read while tired.

It is interesting to note how this diverges from her previous work. Warped Passages and Knocking on Heavens Door were both grounded heavily in physics. There is a strength to writing about fields outside your own. It’s easier to remember how a newcomer to the field feels, and you’re forced to explain things logically as you learn them.

While Dark Matter and the Dinosaurs revolves around physics research, to get us to the final chapter Randall must explain elements of geology, biology, and chemistry. This is done impressively for someone venturing outside of her field.

Much like science, this book is about the journey rather than the end result, and in my opinion it’s a journey worth taking. It was an enjoyable read that emphasizes the interconnectedness of the search for human knowledge. 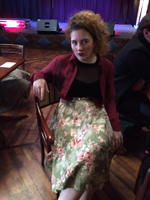 Sophia Frentz is a PhD student in Mitochondrial research at the Murdoch Childrens Research Institute. She occasionally moonlights as a writer, and has had science pieces published by Lateral Magazine and The Conversation. When she’s not at the lab or in the office, she’s probably working on one of her many side projects.