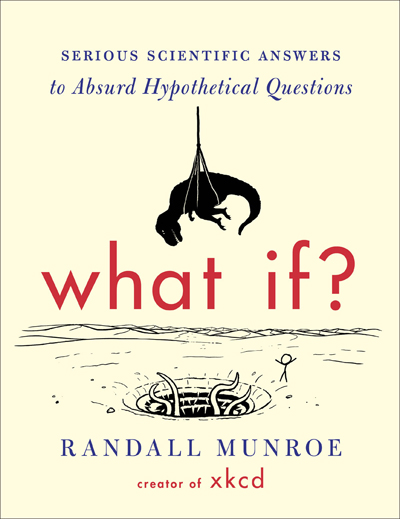 What If?: Serious Scientific Answers to Absurd Hypothetical Questions
By Randall Munroe

“WHAT IF a glass of water was, all of a sudden, literally half-empty?” – Vittorio Iacovella

If you’re someone who asks similar, seemingly inane questions about the world, this book is for you. If you’re not that kind of person, this entertaining, light-hearted yet scientifically accurate book will get you started!

I’ve been following Randall Munroe’s comic strip, XKCD for a few years now. Mixing serious scientific data and philosophical scenarios with a touch of humour and occasionally, romance or sentimentality, XKCD is now fairly well-known among science-types. Munroe is a physicist and a mathematician (he worked at NASA programming robots, quitting in 2006 to write XKCD full time), and he loves using mathematics to solve problems:

“I don’t really like math for its own sake. What I love is that it lets you take some things that you know, and just by moving symbols around on a piece of paper, find out something that you didn’t know that’s very surprising. And I have a lot of stupid questions, and I love that math gives the power to answer them sometimes.”
– source: Comics That Ask ‘What If?’, TED

A couple of years ago, Munroe began answering reader’s hypothetical questions on his website, too. What If? is a collection of answers, some he’s published, some that he hasn’t. The answers to many questions are interspersed with some questions that simply caused him concern:

“Would it be possible to get your teeth to such a cold temperature that they would shatter upon drinking a hot cup of coffee?” asks Shelby Herbert. “Thank you, Shelby, for my new recurring nightmare,” responds Randall.

XKCD: Background Screens.
Perhaps this is an insight
into Randall Munroe’s personality.

Munroe’s responses are hilarious and over-detailed, presented with the seriousness of a pedant and the sweetness of someone genuinely interested in finding the best or most correct answer. His willingness to explore purely hypothetical scenarios – for the chances of any of the proposed situations actually occurring are approximately zero – is endearing and inclusive.

“What would happen if you were to gather a mole (unit of measurement) of moles (the small furry critter) in one place?” – Sean Rice

You, the reader, are drawn in by the end of the first paragraph of each response, even if 30 seconds earlier, you did not have the least bit of interest in what would happen, say, if a baseball was thrown at the speed of light. And that’s because Munroe’s patient and detailed explanations for what would happen if a baseball were thrown at the speed of light are pretty darn fascinating.

Interspersed between and within Munroe’s hypotheticals are brief but revealing anecdotes from his childhood and professional experiences as a scientist. Often hilarious, these vignettes give a small insight into what drives Munroe to both ask and respond to the seemingly silly questions presented in ‘What If?’

The questions are not organised thematically, but this does not detract from the reading; rather it feels as though each question and response is fresh and newly enlightening.

I rate this book ‘5 stars’ for a few reasons. Firstly, it both made me laugh at loud and a couple of times made my heart pull with sweet sentiments, necessary criteria for a good book for me. Secondly, despite being plotless, the book achieves its well-defined aim of providing serious scientific answers to absurd hypothetical questions. I was entertained throughout the entire book, and it made an enjoyable read in cafes and at bedtime. I can find no fault with the book, except perhaps its length; it is far too short. I recommend it to anyone with a serious sense of wonder about the world.

Charlotte holds a Bachelor of Science (Psychology) and a Graduate Bachelor of Education (Primary). She was a primary school teacher with Education Queensland for 6 years, teaching in remote, regional and city locations. Currently, Charlotte is a PhD candidate at the University of Queensland (UQ), focusing on the development of scientific scepticism from a psychological perspective. She also teaches three courses at UQ. Charlotte is passionate about science education, technology education, and preparing pre-service teachers to become effective teachers of science and technology. – From her Blog – How Big is the World