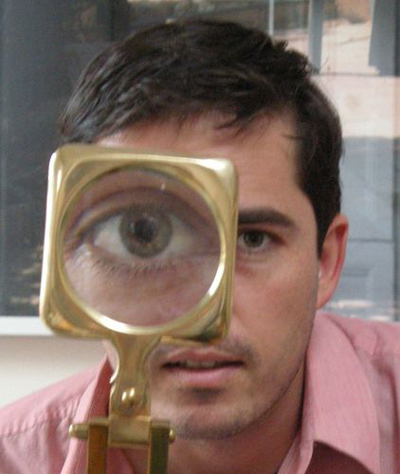 Special thanks to Gregory Crocetti for answering 10 questions about his co-authored book – The Squid, the Vibrio & the Moon

Gregory Crocetti worked as a microbiologist for a decade, studying at University of Queensland and later working as a post-doctoral researcher at University of New South Wales, Sydney and University of Lund, Sweden. Gregory then pursued a teaching qualification and has spent much of the previous five years teaching primary and secondary school science programs with CSIRO Education. During this time he has also worked in Scale Free Network, combining aspects of science (particularly microscopes and microscopic imagery) with art (particularly drawing) to observe the hidden worlds around us. – From Authors’ Homepage

We wanted to tell positive stories about microorganisms (or microbes) and bring attention to the fundamental role they play throughout all life on Earth. We believe that doing this will begin to counter some of the hysteria around hygiene and germs.

The symbiosis between the Bobtail squid and Vibrio fischeri at the heart of The Squid, the Vibrio & the Moon is probably the best understood symbiotic relationship between a microbe and a larger form of life. This felt like a perfect place to start a series of storybooks about microbial symbiosis. However, there are countless other examples of cooperative (mutualistic) symbiotic relationships between microbes and other creatures.

#2 – The 3 contributors brought many different skills to the book. How did you decide who did what?

There were many collaborators involved in the creation of The Squid, the Vibrio & the Moon, with everyone playing to their strengths.

First of all, the Small Friends series is published by the art-science collaboration Scale Free Network, founded by the visual artist, Briony Barr and myself, Gregory Crocetti – a microbial ecologist and science educator. Briony and I are the Art and Science director of the book series (respectively), and I’m also the project manager.

Scale Free Network initiated the project, in part, through a series of long conversations with my former PhD supervisor and microbiologist – Professor Linda Blackall – who is our key scientific consultant for the series.

We then approached writer Ailsa Wild with the idea for the story.

This was followed by a long process of back and forth between myself, Briony, Linda and Ailsa – first in terms of teaching Ailsa about the science – and then helping her translate it into a compelling story, which made sense scientifically but also worked as a narrative. We were then able to storyboard the narrative into a visual sequence (this is a whole other story in itself!), which we gave to visual ecologist Aviva Reed.

#3 – The graphics in the book contributed greatly to the feel of the book. How did the text inform the pictures and vice versa?

The story text was translated into pictures through a process of storyboarding and referencing images from the science, specifically looking at images from the micro-scale, as well as macro-scale images and photographs of the bobtail squid anatomy and habitat.

The storyboarding process takes place between myself and Briony Barr, a rigorous process by which we try to find the best way to depict and represent the story and the science across the different physical scales. This is a challenging process as we are trying to strike a balance between the integrity of the science on one hand and keep it creatively open and accessible on the other.

#4 – How long did the graphics for the book take? How did you research them?

In response to the storyboard, Aviva worked intensively on the illustrations for about a month. However, Aviva also played a key role in the early research and creative development through the project for several months beforehand. Part of my role was to provide Aviva with visual scientific references. She then worked her magic, integrating the storyboard with the reference material through her unique visual style.

For our science section, we felt it was necessary to include further illustrations of some of the scientific concepts, such as the chemical reaction behind the luciferase enzyme. We were able to use many of Aviva’s pictures as well as quotes from the story in this section – but when further detail was needed, Briony and I developed additional illustrations.

Then it was up to the graphic designer Jaye Carcary, to translate the story, Aviva’s illustrations, and the science section into the format of a picture book.

#5 – The book contains an excellent glossary section. Do you think it is crucial in children’s books to not leave the details out?

It would be difficult to describe something as unfamiliar and abstract as the microscopic world and the life of a microbe, without providing scientific explanations and illustrations like we do in our glossary and the rest of our science section.

We felt providing this level of detail was essential for a higher-level understanding of the book…and for those who were simply curious to learn more. We also believe things shouldn’t be dumbed down for children. Also, in putting together the science section, it’s important to acknowledge the role of the science communicator Beth Askham, who helped us to better unpack many of the scientific concepts in the story.

#6 – The book itself was crowd-funded. Do you think this changed how the book came out?

We felt that the crowd-funding process was in many ways a reflection of the cooperative theme of the book. Through many people pre-ordering copies of the book, we were able to publish and distribute a first edition print run of 1000 copies. And as a micro-publisher, using a crowd-funding platform allowed us to do promotion, marketing and sales at the same time. And not needing a publishing house to release it for us means that we have incredible creative freedom and can continue to take risks.

#7 – The book has been out for over a year. What has been the response? From adults? kids? teachers?

We have received overwhelmingly positive responses from readers of all ages – something we are really happy about, because we don’t think this series is just for children.

We really love this testimonial from Dr Maurizio Toscano (Lecturer in Science Education at the University of Melbourne Graduate School of Education) about the suitability of our books to a wide audience:

“Scale Free Network’s production of The Squid, the Vibrio & the Moon and Zobi and the Zoox represents a fundamental shift towards the development of a new and transformative ecological imagination in children and adults alike. Each book tells an engaging story for sure, but what is exceptional about these stories is that they weave together complex and ongoing narratives about the worlds of art, science, technology, society and culture, politics, ecology and ethics to name a few. These books are exemplary of an important philosophy of education: do not assume that anything is so ‘grown-up’ that it is beyond children’s understanding; and do not assume that anything is so childish that it is no longer within the reach of adults.”

#8 – This book is the first of a series about animals/nature relationships. How many more books do you envision?

There are so many stories we would like to tell!

We are planning to create a series of a minimum of 10 books.

And as more and more scientific discoveries are made about microbiomes, there will be even more possibilities for stories describing the symbiotic relationships throughout these complex microscopic worlds.

#9 – You are producing a version of your book in ebook format. What affordances does this new version allow you that the printed version didn’t?

We really love the printed book format and bring able to hold a story in your hands is important to us. The choice to sell an eBook is mainly about making it easier to put this work out to a global audience. While we can (and do) send printed books around the world, an electronic version (complete with author narration and an amazing electronic soundtrack) is much easier and cheaper to distribute.

We’ve just launched our Small Friends Books website, and are currently have eBook version of The Squid, the Vibrio & the Moon available for free downloads (May 1-7) through iBooks and GooglePlay. You can find the link at http://www.smallfriendsbooks.com/squid-vibrio-moon/

#10 – Are you working on any new books/projects you can tell us about?

We are currently in the process of developing a new symbiosis story, but this time in graphic novel format. We can tell you a couple of things about it. It’s about some amazing new science that describes a symbiotic relationship between bacterial viruses (bacteriophages) and animals through their mucus.

We are working in consultation with Microbiologist Jeremy Barr, who is pioneering research into this symbiosis (as part of Forest Rohwers group at San Diego State University). We will again be working again with Ailsa Wild as the writer, as well as Ben Hutchings (Squishface Studios) as the illustrator.

Unlike our previous two books, this one will also have history content, as well as the science. It’s tentatively tilted The Invisible War and will be set on two physical scales (like The Squid the Vibrio & the Moon) – one from the point of view of a human fighting in the French trenches of WWI, and the other – from the perspective of bacterial viruses, fighting off the dysentery pathogen (Shigella) in the trenches in a human gut.

After this graphic novel, we will return to our picture book format with Aviva Reed, possibly looking at the symbiosis between Earthworms and their microbes.