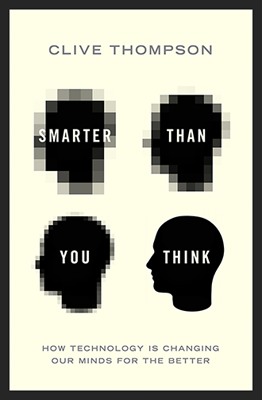 Smarter Than You Think: How Technology is Changing Our Minds for the Better
By Clive Thompson

Smarter than you think

Many opinions about technology’s effects on our species are negative. Even positive views about benefits are generally tinged with warnings about dangers – potential or actual. While we –as a species- tend to be good at causing change, we aren’t all that good at embracing it. Smarter than you think is a good argument that we really should think about the benefits a bit more before leaping to conclusions.

While the main focus is on modern technologies, Thompson carefully considers past advances when evaluating future potential, skillfully showing how technology today is building on hundreds, sometimes thousands, of years of progress and change. His central argument is that there are three ways that technology affects us: improving our memories individually and collectively; improving connectivity between individuals, and identifying patterns in data. Numerous examples are incorporated into the narrative. Some iillustrate specific cases in point – publish a doctored propaganda photo online and our connectedness means that someone is not only likely to notice, but also has the power to highlight this to everyone else (and create a whole host of memes about it too!). Other examples bringing the threads together so that the broader picture zooms into focus: as computer games became more collaborative, they needed to become more challenging. The Fold.it protein folding game provides collaborative challenges, and has led to knowledge sharing by players through wikis and chat rooms. These sites then assist with recognition of new folding patterns – and potentially medical breakthroughs. Players who have basic biological and medical knowledge can, through the power of technology, change the world. Moving through the book, from chess to video games, blogging to the Arab spring, the effects of technology on development of our societies become increasingly apparent.

Thompson makes a convincing argument for enquiry-based learning: when you have the World’s facts at your fingers, detailed memory loses its purpose. Instead, the ability to use the power of the tools at hand is what matters: augmented memory, the commons of collected thinking and knowledge, and the ability to recognise and act on patterns in the constantly growing data mountain.

Many discussions around technology focus on how it threatens to bring out the worst in us. Smarter than you think never denies the potential for harm, but focusses refreshingly on the benefits that technology brings, such as how a single person reading a tweet sent by someone they’ve never met, half a world away, can set off a chain of events that enable medical supplies to reach those who need them. Thompson’s argument is plain and echoes throughout the book; technology is not intrinsically good or bad. It’s what we do with it that makes the difference. If we’re prepared to embrace and explore new technologies, and to carefully evaluate their potential while identifying any limitations, then the benefits are huge. Technology will always evolve – it is up to us to evolve with it.

Allie fell in love with science when she spotted test tubes full of different coloured solutions at high school. She studied astrophysics and chemistry at university. She taught Bioastronomy for several years, as well as being an active participant in the Science in Schools program, and touring Australia as a cast member in the RiAus/BBC Science of Doctor Who Live show. Allie loves reading and learning new things, often ‘helped’ by her two parrots (who prefer eating books to reading them).