The Universe Verse is an ambitious piece of writing/illustration by James Lu Dunbar. In just under 100 pages, Lu Dunbar brings together the history of the Universe (Book 1: The Universe), the Earth (Book 2: It’s Alive!) and mankind (Book3: Great Apes!). Originally published as three separate books, they have come together into this latest version.

The reader is taken through each of these books by two elderly guides who reminded me of Einstein and Rachel Carson. They provide guidance through each of the books and a humourous foil to the verse that is woven throughout the books. The verse is nicely written, infused with scientific information needed to understand the sections and keeps the story going.

In the beginning,
before time had begun,
nothing existed
and nothing was fun.
Where did it come from?
How did nothing appear?
When it comes to that nothing,
Nothing is clear.
It’s the utmost unknown,
but it’s nothing to fear,
that nothing is gone
and instead we are here.

While writing 98 pages of verse about science is an achievement, the most impressive aspect of the book are the illustrations. Lu Dunbar has taken hundreds of hours to put together images that are richly detailed and do their best to introduce the readers to representations of what the universe might have looked like a moment after the big bang, or represent the diversity of animals in the world or the complexity of sub-cellular components.

The book would be perfect for the 10-year old in your life. The verse could be read over an extended period, but I would recommend that an adult be nearby so that child could get some of the trickier words that have been used for the sake of the verse. Some of the scientific concepts can be quite advanced and the book provides a good starting point, but an adult who was either scientifically literate or at least enjoys a good scientific web search should be on hand so that children don’t come away with misconceptions. This is probably most important for book 3, which feels a little rushed as it filled with a little too much information. That being said, the images would provide the greatest enjoyment with an amazing richness of detail that will ensure that they are pointing out this or that detail to a nearby adult for days to come. 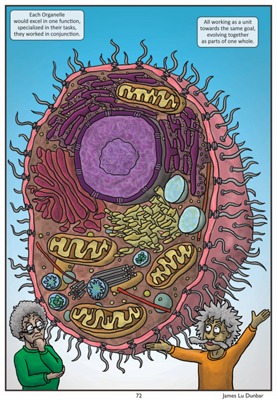 Lu Dunbar has done a fine job in putting together this beautifully produced book for children as a starting point to understanding the scientific wonders of the universe. I recommend you check it out. He has even included the following warning label, which I think sums up his ambition for the book:

Warning! This book contains graphic depictions of scientific knowledge which may lead to decreased ignorance and heightened sensations of awe and wonder.

Dr George Aranda is a former cognitive neuroscience researcher who has moved to the world of science education and science communication research. He runs the Big Ideas science book club in Melbourne and is the curator of Science Book a Day.