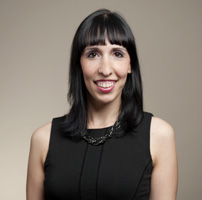 Special thanks to Amanda Gefter for answering 6 questions about her recently featured book – Trespassing on Einstein’s Lawn: A Father, a Daughter, the Meaning of Nothing, and the Beginning of Everything

I am a writer specializing in fundamental physics and cosmology, and author of the book Trespassing on Einstein’s Lawn. I am a consultant for New Scientist magazine, where I previously served as Books & Arts editor and founded CultureLab. I was a 2012-13 Knight Science Journalism Fellow at MIT. In addition to physics and cosmology, I am fascinated by neuroscience and philosophy of mind and love literature and modern art. – From Amanda’s Homepage

#1 – What was the impetus for Trespassing on Einstein’s Lawn?

The whole thing started when I was fifteen years old and my father took me to our favorite Chinese restaurant and asked me how I’d define ‘nothing’. He’d been thinking about how something, a universe, could come from nothing, and he recruited me – the most unlikely character, his misbehaving teenager who was failing math and had opted out of physics—to join him in a quest to understand the nature of reality. Seventeen years later, I sat down to write Trespassing on Einstein’s Lawn, which is at once a chronicle of our crazy adventures and an in-depth exploration of reality at its most fundamental level. As outsiders in the world of physics, my father and I had relied a great deal on books – as we hunted for answers, we amassed a library of some 1500 science books. But the book we were searching for kept eluding us—a book about the ultimate nature of reality, the role of observers and the relationship between something and nothing that was written in lay language and yet went deep into the physics without dumbing things down. Finally I realized that I had to try to write it.

#2 – You have met a number of famous physicists. Who did you enjoy meeting the most? Why?

Meeting Stephen Hawking in person was pretty amazing, because he has this mystique about him that is larger-than-life. And meeting Lenny Susskind was awesome; he is such a creative thinker, and his work has remained at the absolute forefront of cutting-edge physics for decades. But no one left a bigger impression on me than John Wheeler. My father and I posed as journalists in order to sneak into a conference in Wheeler’s honor. He was our hero – the poet laureate of existence. He had this wild idea that observers play a deep role in the creation of the universe, and when we met him my father asked, “If observers create the universe, where do the observers come from?” Wheeler responded with two cryptic phrases: “The universe is a self-excited circuit” and “The boundary of a boundary is zero.” We spent the next ten years trying to solve those riddles.

#3 – Your book was started by a question from a conversation with your father. What does your father think about your journey and the final result in your book?

It’s weird – I’m speaking for him here, but I suspect that when he looks at the book, he sees it as completely obvious and inevitable and at the same time utterly crazy and surreal. Like, the book is the natural outcome of everything we were trying to do from the very beginning, it’s the period at the end of a very long sentence. But the fact that it all actually happened…the fact that it actually exists as this physical object in the world…it’s hard to believe. And of course it must be strange to see yourself as a character in someone else’s book. All in all I know he loves the book—and he’s just a little biased! More importantly, in terms of the journey, I think he feels genuinely satisfied that we answered his original question. And it only took seventeen years.

#4 – Your book is described as part science book and part memoir. How did you combine these two aspects?

I realize that from an outside perspective those seem like unlikely bedfellows – a memoir about a young girl and her father combined with serious fundamental physics. And I wrote the book in my natural voice, so it’s sort of casual and lighthearted, sometimes sarcastic, sometimes emotional – all things that don’t typically pair with quantum gravity. Some readers (and some reviewers) have found it difficult to reconcile those seemingly contradictory aspects. There will always be people who need things to fit neatly into pre-existing categories. I’m not one of them – how could I be? I never fit neatly into a pre-existing category. I wasn’t really a journalist, but I wasn’t a physicist either. From my perspective, this was the most natural way, the only way, to write the book. Physics is my life and my life is physics. My mind isn’t divided by genre—it’s all one thing. Besides, everything I was learning in physics was teaching me that there’s no such thing as an omniscient God’s eye view of the universe – pretend there is and you violate the laws of physics. The universe has to be defined relative to a given observer, no more than one at a time. In other words, physics demands first person narration. Who was I to argue?

#5 – With so many abstract ideas and physics stories, how did you manage to fit them into a narrative? How did you decide what bits to leave out?

It’s hard to look back on a large swath of your life and distill a cohesive narrative. And I wrote the book in such a way that the reader is learning the physics along with me. So I tried to leave out the many false starts and ultimately irrelevant tangents that my father and I experienced because they would only confuse the reader in an unhelpful way. The ideas trace the chronology of the narrative, but I wanted to be sure they unfolded in a logical way. Sometimes that meant having to leave out a good story, which might have stung at the time, but it better served the book and the reader.

#6 – Are you working on any new projects/books you can tell us about?

I’m really excited about the new book I’m working on. It’s still early in the process so I have to be a bit cagey. But when my father and I were reading Wheeler’s journals at the American Philosophical Society in Philadelphia, I came across the name of one of Wheeler’s students of whom I’d never heard. That was odd, considering Wheeler’s students all went on to become renowned physicists – Richard Feynman, Hugh Everett, Kip Thorne, etc. So I started looking into it, and found a rather incredible story about this unknown guy who studied physics with Wheeler but went on to figure out some incredible things about how the mind works. And for me, personally, that’s the question that still keeps me up at night – what is consciousness? And I think it’s ultimately a question of fundamental physics – what kind of objective reality can support subjective experience? How does the reality wrought by our consciousness relate to the supposed reality “out there”? The new book will explore this strange tension between physics and philosophy of mind—but again, these heavy ideas will be woven into a very human narrative.