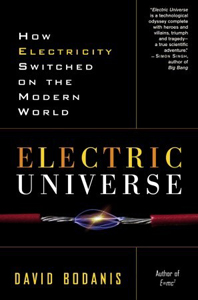 Synopsis: In Electric Universe, David Bodanis weaves tales of romance, divine inspiration, and fraud through a lucid account of the invisible force that permeates our universe. In these pages the virtuoso scientists who plumbed the secrets of electricity come vividly to life, including familiar giants like Thomas Edison; the visionary Michael Faraday, who struggled against the prejudices of the British class system; and Samuel Morse, a painter who, before inventing the telegraph, ran for mayor of New York on a platform of persecuting Catholics. Here too is Alan Turing, whose dream of a marvelous thinking machine—what we know as the computer—was met with indifference, and who ended his life in despair after British authorities forced him to undergo experimental treatments to “cure” his homosexuality.

From the frigid waters of the Atlantic to the streets of Hamburg during a World War II firestorm to the interior of the human body, Electric Universe is a mesmerizing journey of discovery by a master science writer.

Winner of the 2006 Aventis Book Prize

Author’s Mini-bio: David Bodanis is a futurist, speaker, and writer of popular science books. Originally from Chicago, he received an undergraduate education in mathematics, physics and economics at the University of Chicago.[1] He lived in France for ten years and is now based in London. – Wikipedia

Nick Ross, chair of the General Prize Judging Panel said: “This book is wonderfully accessible it’s a huge canvas but it reads like a novel, with twists and turns that would make a fiction writer happy to have been so inventive, and opens up a universe of facts that would scarcely be credible in an imaginary tale. It’s simply a very good read and if you have little or no interest in electricity, after reading this you will have.”