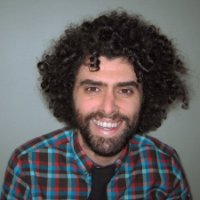 This week’s 10 Great Books list is brought to us by the very busy Simon Pampena who found time in his busy schedule to provide this list of great mathematics titles. Thanks Simon!

Simon Pampena, the Maths Man, combines the ideas of mathematics with the craft of stand up comedy to communicate the true nature of maths – mind-blowing fun! He is a regular on ABC1’s Catalyst along with Channel 10 Breakfast. On top of this he has written, produced and performed in 9 maths comedy shows for the Melbourne International Comedy Festival, Darwin Arts Festival, Adelaide Fringe and the Edinburgh International Science Festival. Seeing one of Simon’s comedy shows is to experience maths his way – a rocket-pack strapped full of maths enthusiasm! – From National Literacy Website

The most beautiful and complete text on algebra you could possibly want. I keep coming back to this work.

The Banach-Tarski Paradox by Stan Wagon

Comprehensive text on one of my favourite mathematical theorems.

From Here to Infinity by Ian Stewart

I studied this book when I was still an undergraduate as it gave me a understanding of where maths was at the end of the 20th century.

The Number Sense by Stanislas Dehaene

Awesome text on where numbers come from. A real eye-opener.

Thinking in Numbers: How Maths Illuminates Our Lives by Daniel Tammet

First hand account of how an extraordinarily gifted mathematical savant thinks about numbers.

Meta Math!: The Quest for Omega by Gregory Chaitin

Chaitin is a legend and this book explains his most famous result: numbers that describe the limits of computability.

Maths, intelligence, consciousness and a Pulitzer Prize. The perfect cafe conversation starter. I knew a guy a uni who used this book to pick up girls.

Proofs from THE BOOK by Martin Aigner and Günter M. Ziegler

An exquisite text covering the work of Paul Erdős. It lists the most elegant proofs of mathematical theorems Erdős claimed were from THE BOOK written by God himself.

How to Solve It: A New Aspect of Mathematical Method by George Pólya

It’s all in the name but this guy is a master. This book would be the equivalent of “How to play guitar” by Eddie Van Halen.