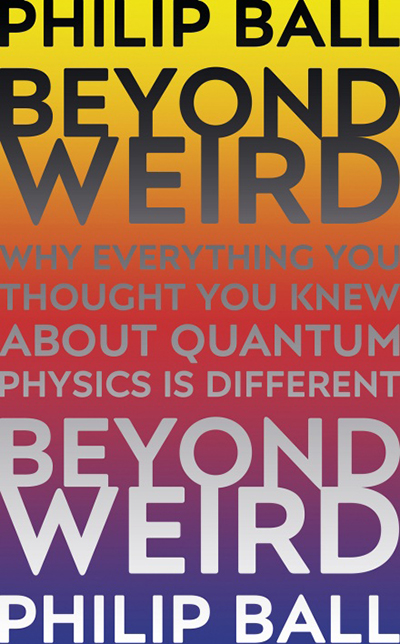 Beyond Weird: Why Everything You Thought You Knew about Quantum Physics Is Different, by Philip Ball

Synopsis: “Anyone who is not shocked by quantum theory has not understood it.”

Since Niels Bohr said this many years ago, quantum mechanics has only been getting more shocking. We now realize that it’s not really telling us that “weird” things happen out of sight, on the tiniest level, in the atomic world: rather, everything is quantum. But if quantum mechanics is correct, what seems obvious and right in our everyday world is built on foundations that don’t seem obvious or right at all—or even possible.

An exhilarating tour of the contemporary quantum landscape, Beyond Weird is a book about what quantum physics really means—and what it doesn’t. Science writer Philip Ball offers an up-to-date, accessible account of the quest to come to grips with the most fundamental theory of physical reality, and to explain how its counterintuitive principles underpin the world we experience. Over the past decade it has become clear that quantum physics is less a theory about particles and waves, uncertainty and fuzziness, than a theory about information and knowledge—about what can be known, and how we can know it.  Discoveries and experiments over the past few decades have called into question the meanings and limits of space and time, cause and effect, and, ultimately, of knowledge itself. The quantum world Ball shows us isn’t a different world. It is our world, and if anything deserves to be called “weird,” it’s us.

Hardcover Edition: Beyond Weird: Why Everything You Thought You Knew about Quantum Physics Is Different