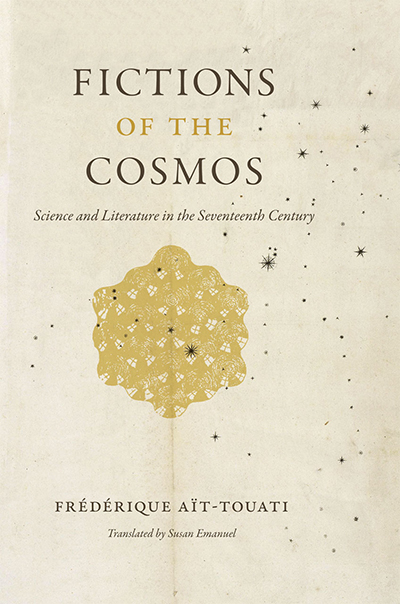 Fictions of the Cosmos: Science and literature in the seventeenth century, by Frédérique Aït-Touati

Synopsis: In today’s academe, the fields of science and literature are considered unconnected, one relying on raw data and fact, the other focusing on fiction. During the period between the Renaissance and the Enlightenment, however, the two fields were not so distinct. Just as the natural philosophers of the era were discovering in and adopting from literature new strategies and techniques for their discourse, so too were poets and storytellers finding inspiration in natural philosophy, particularly in astronomy.

A work that speaks to the history of science and literary studies, Fictions of the Cosmos explores the evolving relationship that ensued between fiction and astronomical authority. By examining writings of Kepler, Godwin, Hooke, Cyrano, Cavendish, Fontenelle, and others, Frédérique Aït-Touati shows that it was through the telling of stories—such as through accounts of celestial journeys—that the Copernican hypothesis, for example, found an ontological weight that its geometric models did not provide. Aït-Touati draws from both cosmological treatises and fictions of travel and knowledge, as well as personal correspondences, drawings, and instruments, to emphasize the multiple borrowings between scientific and literary discourses. This volume sheds new light on the practices of scientific invention, experimentation, and hypothesis formation by situating them according to their fictional or factual tendencies.

Mini-bio: Frédérique Aït-Touati is a teaching fellow in French at St John’s College at the University of Oxford. – University of Chicago Press

Hardcover Edition: Fictions of the Cosmos: Science and Literature in the Seventeenth Century

Kindle Edition: Fictions of the Cosmos: Science and Literature in the Seventeenth Century