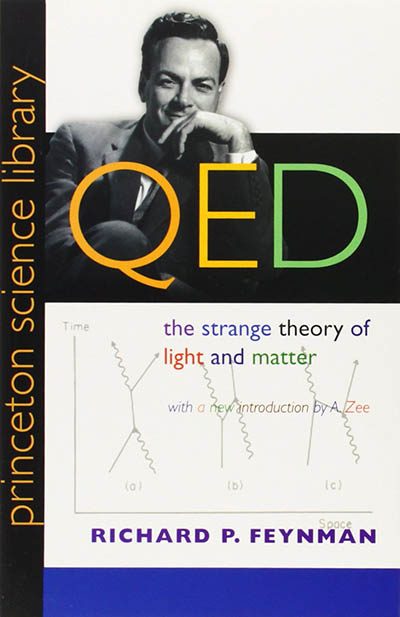 QED: The strange theory of light and matter, by Richard Feynman

Synopsis: Famous the world over for the creative brilliance of his insights into the physical world, Nobel Prize-winning physicist Richard Feynman also possessed an extraordinary talent for explaining difficult concepts to the nonscientist. QED–the edited version of four lectures on quantum electrodynamics that Feynman gave to the general public at UCLA as part of the Alix G. Mautner Memorial Lecture series–is perhaps the best example of his ability to communicate both the substance and the spirit of science to the layperson.

The focus, as the title suggests, is quantum electrodynamics (QED), the part of the quantum theory of fields that describes the interactions of the quanta of the electromagnetic field-light, X rays, gamma rays–with matter and those of charged particles with one another. By extending the formalism developed by Dirac in 1933, which related quantum and classical descriptions of the motion of particles, Feynman revolutionized the quantum mechanical understanding of the nature of particles and waves. And, by incorporating his own readily visualizable formulation of quantum mechanics, Feynman created a diagrammatic version of QED that made calculations much simpler and also provided visual insights into the mechanisms of quantum electrodynamic processes.

In this book, using everyday language, spatial concepts, visualizations, and his renowned “Feynman diagrams” instead of advanced mathematics, Feynman successfully provides a definitive introduction to QED for a lay readership without any distortion of the basic science. Characterized by Feynman’s famously original clarity and humor, this popular book on QED has not been equaled since its publication.

Mini-bio: Richard Phillips Feynman was an American theoretical physicist known for his work in the path integral formulation of quantum mechanics, the theory of quantum electrodynamics, and the physics of the superfluidity of supercooled liquid helium, as well as in particle physics for which he proposed the parton model. For his contributions to the development of quantum electrodynamics, Feynman, jointly with Julian Schwinger and Shin’ichirō Tomonaga, received the Nobel Prize in Physics in 1965. – Wikipedia

“Physics Nobelist Feynman simply cannot help being original. In this quirky, fascinating book, he explains to laymen the quantum theory of light, a theory to which he made decisive contributions.”—The New Yorker

“Feynman’s lectures must have been marvelous and they have been turned into an equally entrancing book, a vivid introduction to QED which is leavened and enlivened by his wit. Anyone with a curiosity about physics today should buy it, not only to get to grips with the deepest meaning of quantum theory but to possess a slice of history.”–Pedro Waloschek, Nature

Paperback Edition: QED: The Strange Theory of Light and Matter