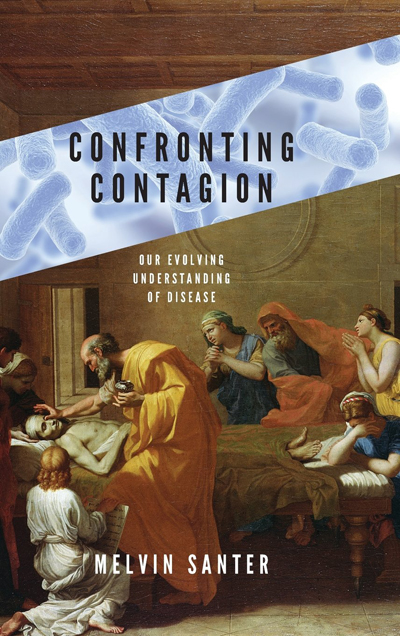 Confronting Contagion: Our Evolving Understanding of Disease by Melvin Santer

Synopsis: Throughout history, humankind’s working theories regarding the cause of infectious disease have shifted drastically, as cultures developed their philosophic, religious, and scientific beliefs. Plagues that were originally attributed to the wrath of the gods were later described as having nothing to do with the gods, though the cause continued to be a mystery. As centuries passed, medical and religious theorists proposed reasons such as poor air quality or the configuration of the planets as causes for the spread of disease. In every instance, in order to understand the origin of a disease theory during a specific period of history, one must understand that culture’s metaphysical beliefs.

In Confronting Contagion, Melvin Santer traces a history of disease theory all the way from Classical antiquity to our modern understanding of viruses. Chapters focus on people and places like the Pre-Socratic Philosophers, Galen and the emergence of Christianity in Rome, the Black Death in fourteenth-century Europe, cholera and puerperal sepsis in the nineteenth century, and other periods during which our understanding of the cause of disease was transformed.

The cause of contagious disease was demonstrated to be a general biological phenomenon; there are contagious diseases of plants, animals, and bacteria, with causes identical to causes of human diseases. These issues are uniquely included in this book.

In each case, Santer identifies the key thinkers who helped form the working disease theories of the time. The book features many excerpts from primary sources, from the Hippocratic Corpus to the writings of twentieth-century virologists, creating an authentic synthesis of the Western world’s intellectual and religious attitude toward disease throughout history.

Mini-bio: Melvin Santer was Professor Emeritus of Biology at Haverford College. He has published many articles on the causes of infectious disease in both plants and animals, as well as on the history of disease theory. – Oxford University Press