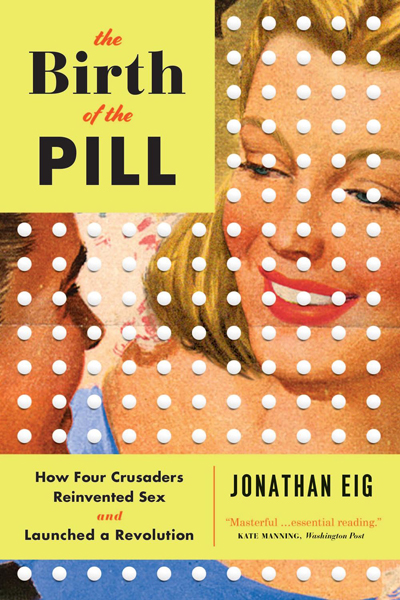 The Birth of the Pill: How Four Crusaders Reinvented Sex and Launched a Revolution by Jonathan Eig

Synopsis: The fascinating story of one of the most important scientific discoveries of the twentieth century.

We know it simply as “the pill,” yet its genesis was anything but simple. Jonathan Eig’s masterful narrative revolves around four principal characters: the fiery feminist Margaret Sanger, who was a champion of birth control in her campaign for the rights of women but neglected her own children in pursuit of free love; the beautiful Katharine McCormick, who owed her fortune to her wealthy husband, the son of the founder of International Harvester and a schizophrenic; the visionary scientist Gregory Pincus, who was dismissed by Harvard in the 1930s as a result of his experimentation with in vitro fertilization but who, after he was approached by Sanger and McCormick, grew obsessed with the idea of inventing a drug that could stop ovulation; and the telegenic John Rock, a Catholic doctor from Boston who battled his own church to become an enormously effective advocate in the effort to win public approval for the drug that would be marketed by Searle as Enovid.

Spanning the years from Sanger’s heady Greenwich Village days in the early twentieth century to trial tests in Puerto Rico in the 1950s to the cusp of the sexual revolution in the 1960s, this is a grand story of radical feminist politics, scientific ingenuity, establishment opposition, and, ultimately, a sea change in social attitudes. Brilliantly researched and briskly written, The Birth of the Pill is gripping social, cultural, and scientific history.

Paperback Edition: The Birth of the Pill: How Four Crusaders Reinvented Sex and Launched a Revolution

MP3 CD Edition: The Birth of the Pill: How Four Crusaders Reinvented Sex and Launched a Revolution