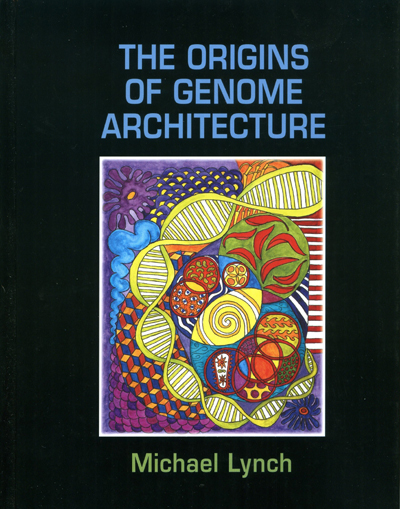 The Origins of Genome Architecture by Michael Lynch

Synopsis: With official genomic blueprints now available for hundreds of species, and thousands more expected in the near future, the field of biology has been forever transformed. Such readily accessible data have encouraged the proliferation of adaptive arguments for the evolution of gene and genomic features, often with little or no attention being given to simpler and more powerful alternative explanations. By integrating the central observations from molecular biology and population genetics relevant to comparative genomics, Lynch shows why the details matter.

Presented in a nontechnical fashion, at both the population-genetic and molecular-genetic levels, this book offers a unifying explanatory framework for how the peculiar architectural diversity of eukaryotic genomes and genes came to arise. Under Lynch’s hypothesis, the genome-wide repatterning of eukaryotic gene structure, which resulted primarily from nonadaptive processes, provided an entirely novel resource from which natural selection could secondarily build new forms of organismal complexity.

Mini-bio: Michael Lynch  is Distinguished Professor of Evolution, Population Genetics and Genomics at Indiana University, Bloomington, Indiana. Besides many highly acclaimed papers, especially in population genetics, he has written a two volume textbook with Bruce Walsh, widely considered the “Bible” of quantitative genetics. He has been a major force in promoting neutral theories to explain genomic architecture based on the effects of population sizes in different lineages; he presented this point of view comprehensively in his 2007 book “The Origins of Genome Architecture”.

Michael Lynch is one of the greatest modern population geneticists, and in this book he advances his ideas about how genomes evolve over time – which is mostly by processes other than natural selection (which I’m sure will surprise many people)! – From 10 Great Books on Genetics