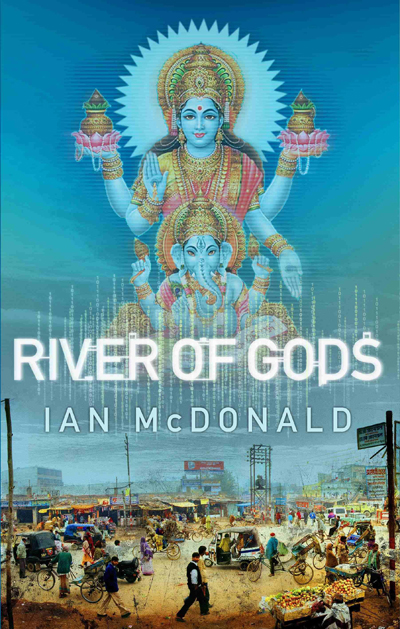 River of Gods by Ian McDonald

Synopsis: As Mother India approaches her centenary, nine people are going about their business — a gangster, a cop, his wife, a politician, a stand-up comic, a set designer, a journalist, a scientist, and a dropout. And so is Aj — the waif, the mind-reader, the prophet — when she one day finds a man who wants to stay hidden.

In the next few weeks, they will all be swept together to decide the fate of the nation.

River of Gods teems with the life of a country choked with peoples and cultures — one and a half billion people, twelve semi-independent nations, nine million gods. Ian McDonald has written the great Indian novel of the new millennium, in which a war is fought, a love betrayed, a message from a different world decoded, as the great river Ganges flows on.

The big, colorful pinwheel on this list, McDonald’s vision of 2047 India is one of the most dynamic, interest-building novels to come out in the past decade.  Stretched across many characters, bits of dazzling imagination take flight and set the story moving across a variety of near-future scenes in an India both revitalized and downtrodden by technological change.  Sexless humans, AI soap opera stars, space anomalies, longevity treatments—the vibrant ideas seemingly never stop.  All cohering upon the climax, however, this is an exciting novel that manages to also be conceptually complex—not an easy feat. – From 10 Great Scifi Books (3)