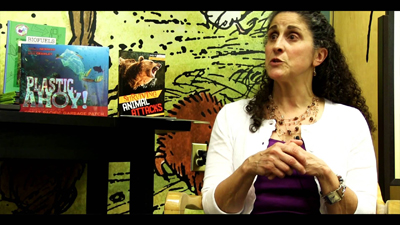 Patricia on a boat with Brent. 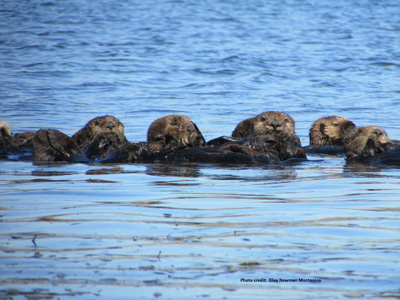 #1 – What was the impetus of Sea Otter Heroes?

After I wrote Plastic, Ahoy! Investigating the Great Pacific Garbage Patch, Chelsea Rochman (one of the three scientists featured in the book) invited me to speak at a retreat for newly-minted conservation scientists. Her colleagues wanted to know more about how to write their findings in a book for kids. I discussed the children’s book market, how to hook readers with science, and showed them examples of stories that had made compelling books. Of course, my hidden agenda was to find another science story. Knowing the challenges of the children’s book market and knowing how busy scientists are, I suggested they consider approaching an author before tackling the project on their own.

At the end of the day, marine biologist Brent Hughes and his mentor, Lilian Carswell, the Southern Sea Otter Recovery Coordinator for U.S. Fish and Wildlife, approached me to ask if I would write Brent’s story. His research had all the makings of a great book: an eco-mystery, a plot twist, and sea otters. Who in their right mind doesn’t love sea otters?

#2 – You feature many aspects of the otter’s ecosystem. How much research did you have to do to get this right?

I read a lot of scientific studies and writings about trophic cascades and combed Brent’s published paper on his experiment for details, but mainly I spent a day with Brent and Lilian on the slough, and another day with Brent in his lab. My daughter, who is a zookeeper at the San Diego Safari Park, accompanied me as general assistant and photographer. Being on-site was a huge help! I felt the breeze and the warm sun, saw the otters with my own eyes, and leaned over the side of Brent’s skiff to examine seagrass. I asked hundreds of questions. Some questions I asked more than once in different ways to be sure I understood. Lilian kept me well-stocked with current sea otter literature because I wanted to give readers the full scope of how the fur trade affected otters, how they made their comeback, and how not everyone is glad they’re back.

After I wrote a draft that I was willing to share, I asked Brent and Lilian for input to be sure the science was correct. And I asked them to reread the manuscript after my editor and I had changed several things. Often times, inaccuracies are inadvertently introduced when reorganizing text and clarifying concepts for young readers. Brent and Lilian stuck with me every step of the way, and I’m very grateful for their support.

#3 – Seagrass features in the story of the otters. Why is the seagrass so important?

Seagrass performs several ecological functions that benefit humans. For instance, it calms waves to protect our shorelines, it provides a nursery habitat for young fish to grow to adulthood for our food supply, and it removes excess carbon in our atmosphere and locks it away underground.

#4 – Your book looks into the research leading Brent to conclude that they are Apex predators. Is this idea of ‘apex’ predators new? What does this idea mean?

In Sea Otter Heroes, I discuss the wolves that returned to Yellowstone National Park in the U.S. The wolves controlled the exploding elk population, which in turn prompted other cascading effects to the ecosystem. Hence the term trophic cascade. Likewise, when sea otter numbers recovered enough and moved into Elkhorn Slough, the amount of seagrass coverage expanded. Normally, sea otters are not apex predators in the open ocean, but in the protected slough they reign supreme. Because of Brent’s experiment, he uncovered a trophic cascade that no one ever knew about.

#5 – You highlight the importance of thinking like a scientist. Why is it important to highlight this process to your readers?

All science begins with questions, and kids are champion questioners. But the scientific method is also a terrific way to approach every problem. Ask a question. Form a hypothesis. Gather data. Analyze results. Form conclusions. It’s so logical (not meaning to sound like Star Trek’s Mr. Spock).

Additionally, narrative science like Sea Otter Heroes offers kids a way to expand their literacy skills. Science stories can be the tool that engages kids—both in the physical world and in their imaginations. It encourages critical thinking and the construction of arguments, which require communication skills such as reading, writing, speaking, and listening. Science also gives kids confidence to explore competing claims and arrive at a conclusion.

But we don’t have to tell them all that. Just give them a science story and see what happens.

#6 – Your book follows the scientific inquiry of Brent and his career. Is Brent typical of scientists? Or is he unique in some ways? What is Brent doing now?

I think Brent is very typical of many scientists. He’s serious about his work and carefully designs experiments to produce valid results. Like other scientists, Brent does not work in a vacuum. For instance, for his study about seagrass that I discuss in Sea Otter Heroes, he relied on the long-range work of several colleagues for historical data about seagrass coverage and sea otter eating habits in the slough.

That said, Brent is also unique because he cared enough to ask why seagrass flourished in a nutrient-polluted habitat. Many, many scientists study the slough, but Brent asked the question. The mystery of that single question drove him until he found a satisfactory answer.

Brent continues to study other ways that sea otters support the Elkhorn Slough. For instance, striped shore crabs, a different species of crab than the one featured in Sea Otter Heroes, burrows into the muddy banks that border the slough. Enough holes eventually make the banks crumble. As I wrote Sea Otter Heroes, Brent was trying to figure out if sea otters ate enough striped shore crabs to help the banks remain stable. Readers can visit his website to read his publications.

#7 – There is a strong eco-message in your book, even getting your readers to create their own ‘mesocosm’. Is it important to you for the young people in our world experience the environment firsthand?

Absolutely. We are connected to our environment in multiple ways. The ocean makes nearly 75% of our oxygen and our weather patterns. It feeds us, transports us, and entertains us. Sea otters save seagrass and allow it to perform its environmental functions. If we don’t take care of what sustains us, then there will be no “us.” I hope that my books show young readers that a few minor changes to our habits go a long way. And I hope that these readers share their new-found knowledge with family and friends.

#8 – Can you tell us what book/project you’re working on next?

Zoo Scientists to the Rescue will be released this fall, and I just found out that it is a Junior Library Guild Selection. This book explores how three scientists from three different zoos save orangutans, black-footed ferrets, and black rhinos. Expect scientists doing cool things, plus a whole lot of great animal photos taken by Plastic, Ahoy! photographer Annie Crawley.