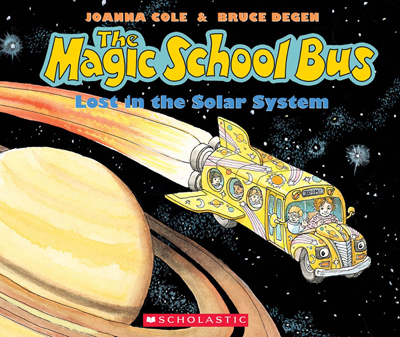 Lost in the Solar System (The Magic School Bus, #4) by Joanna Cole and illustrated by Bruce Degen

Synopsis: To celebrate its 20th anniversary, Scholastic is re-releasing the ten original Magic School Bus titles in paperback. With updated scientific information, the bestselling science series ever is back!

The fieldtrip to the planetarium is foiled when the museum turns out to be closed, but Ms. Frizzle saves the day. The Magic School Bus turns into a spaceship and takes the class on a trip zooming through the atmosphere, to the Moon, and beyond! With up-to-date facts about the solar system, revised for this edition.

Mini-bio: Joanna Cole, is an American writer of children’s books. She is most famous as the author of The Magic School Bus series. Wikipedia

Mini-bio: Bruce Degen is an American illustrator and writer with over forty children’s books to his credit. He may be known best for illustrating the The Magic School Bus series written by Joanna Cole. Wikipedia