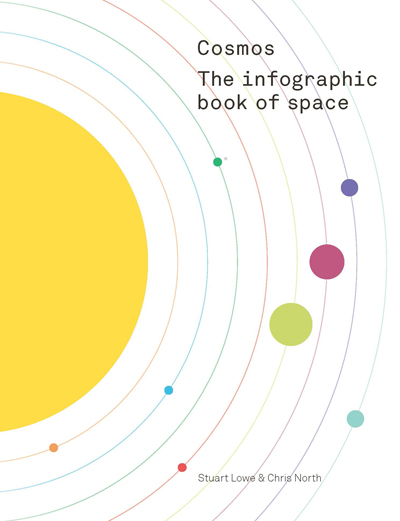 Cosmos: An Infographic Book of Space by Stuart Lowe and Chris North

Synopsis: Life. The Universe. Everything. The human race has always revealed an insatiable hunger to search “to infinity and beyond”. In this truly mind-blowing book, partners in science Stuart Lowe and Chris North use cutting edge infographics to illuminate – in a new and unique way – the most amazing places and objects that modern science has laid bare. Featuring innovative, inspirational and original designs by leading authors in their field, COSMOS: THE INFOGRAPHIC BOOK OF SPACE delves into a truly international subject and will appeal to stargazers and space enthusiasts of all ages.

Including the Big Bang itself, COSMOS: THE INFOGRAPHIC BOOK OF SPACE:

Mini-bio: Stuart Lowe has previously worked at Jodrell Bank Observatory where he helped build astronomical instruments used on radio telescopes in the UK and Poland. At the University of Manchester, he worked on the European Space Agency’s Planck satellite, which was launched in 2009 to look at the echoes of the Big Bang. He co-founded the UK’s longest running, regular, astronomy podcast – The Jodcast.
Stuart’s Twitter: https://twitter.com/astronomyblog

Mini-bio: Chris North is an astrophysicist at Cardiff University. Having worked on a number of experiments and space missions, he is currently part of the Herschel Space Observatory team, looking at far-infrared light from star forming in our galaxy and across the Universe.
Chris’ Twitter: https://twitter.com/chrisenorth