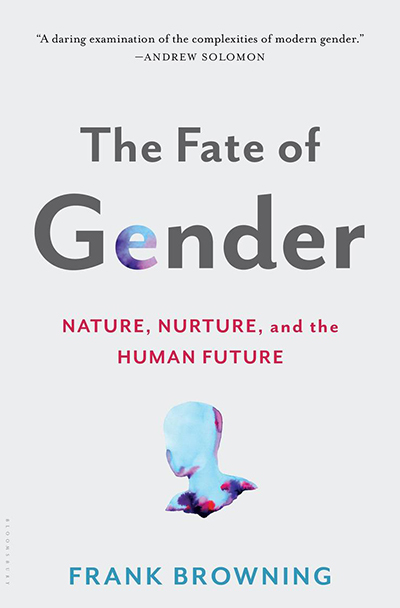 The Fate of Gender: Nature, Nurture, and the Human Future by Frank Browning

Synopsis: Frank Browning takes us into human gender geographies around the world, from gender-neutral kindergartens in Chicago and Oslo to women’s masturbation classes in Shanghai, from conservative Catholics in Paris fearful of God and Nature to transsexual Mormon parents in Utah. As he shares specific and engaging human stories, he also elucidates the neuroscience that distinguishes male and female biology, shows us how all parents’ brains change during the first weeks of parenthood, and finally how men’s and women’s responses to age differ worldwide based not on biology but on their earlier life habits. Starting with Simone de Beauvoir’s world-famous observation that one is not born a woman but instead becomes a woman, Browning goes on to show equally that no one is born a man but learns how to perform as a man, and that there is no fixed way of being masculine or feminine.

Increasingly, the categories of “male” and “female” and even “gay” and “straight” seem old-fashioned and reductive. Just visible on the horizon is a world of gender and sexual fluidity that will remake our world in fundamental ways. Linking science to culture and behavior, and delving into the lives of individuals challenging historic notions, Browning questions the traditional division of Nature vs. Nurture in everything from plant science to sexual expression, arguing in the end that life consists of an endless waltz between these two ancient notions.

Mini-bio: Frank Browning is an American author and former correspondent for National Public Radio. His books include “The Fate of Gender: Nature, Nurture and the Human Future” (forthcoming, Bloomsbury, June 2016) , “The Monk & the Skeptic: Dialogues on Sex, Faith and Religion” ( 2013), “The American Way of Crime: From Salem to Watergate (1980), The Culture of Desire: Paradox and Perversity in Gay Lives Today (1993), A Queer Geography: Journeys Toward a Sexual Self (1996) and Apples: Story of the Fruit of Temptation (1996). – Wikipedia