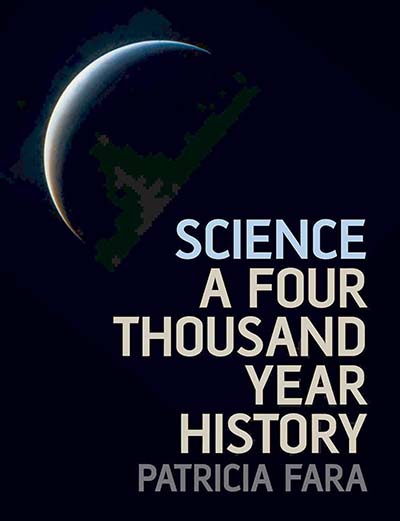 Synopsis: In Science, Patricia Fara rewrites science’s past to provide new ways of understanding and questioning our modern technological society. Sweeping through the centuries from ancient Babylon right up to the latest hi-tech experiments in genetics and particle physics, Fara’s book also ranges internationally, challenging notions of European superiority by emphasizing the importance of scientific projects based around the world, including revealing discussions of China and the Islamic Empire alongside the more familiar stories about Copernicus’s sun-centered astronomy, Newton’s gravity, and Darwin’s theory of evolution.

We see for instance how Muslim leaders encouraged science by building massive libraries, hospitals, and astronomical observatories and we rediscover the significance of medieval Europe–long overlooked–where, surprisingly, religious institutions ensured science’s survival, as the learning preserved in monasteries was subsequently developed in new and unique institutions: universities. Instead of focussing on esoteric experiments and abstract theories, she explains how science belongs to the practical world of war, politics, and business. And rather than glorifying scientists as idealized heroes, she tells true stories about real people–men (and some women) who needed to earn their living, who made mistakes, and who trampled down their rivals.