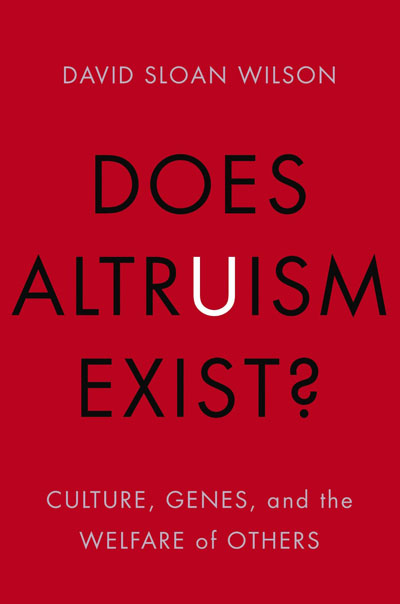 Synopsis: Does altruism exist? Or is human nature entirely selfish? In this eloquent and accessible book, famed biologist David Sloan Wilson provides new answers to this age-old question based on the latest developments in evolutionary science.

From an evolutionary viewpoint, Wilson argues, altruism is inextricably linked to the functional organization of groups. “Groups that work” undeniably exist in nature and human society, although special conditions are required for their evolution. Humans are one of the most groupish species on earth, in some ways comparable to social insect colonies and multi-cellular organisms. The case that altruism evolves in all social species is surprisingly simple to make.

Yet the implications for human society are far from obvious. Some of the most venerable criteria for defining altruism aren’t worth caring much about, any more than we care much whether we are paid by cash or check. Altruism defined in terms of thoughts and feelings is notably absent from religion, even though altruism defined in terms of action is notably present. The economic case for selfishness can be decisively rejected. The quality of everyday life depends critically on people who overtly care about the welfare of others. Yet, like any other adaptation, altruism can have pathological manifestations. Wilson concludes by showing how a social theory that goes beyond altruism by focusing on group function can help to improve the human condition.

Mini-bio: David Sloan Wilson is an American evolutionary biologist and a Distinguished Professor of Biological Sciences and Anthropology at Binghamton University. He is a son of the author Sloan Wilson. Wikipedia
Author’s Twitter: https://twitter.com/david_s_wilson