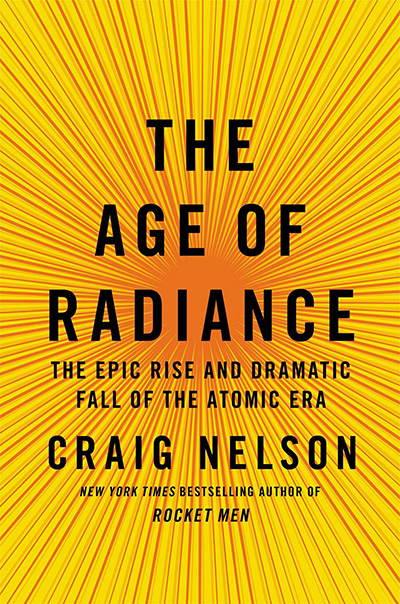 Synopsis: From the New York Times bestselling author of Rocket Men and the award-winning biographer of Thomas Paine comes the first complete history of the Atomic Age, a brilliant, magisterial account of the men and women who uncovered the secrets of the nucleus, brought its power to America, and ignited the twentieth century.

When Marie Curie, Enrico Fermi, and Edward Teller forged the science of radioactivity, they created a revolution that arced from the end of the nineteenth century, through the course of World War II and the Cold War of superpower brinksmanship, to our own twenty-first-century confrontation with the dangers of nuclear power and proliferation—a history of paradox, miracle, and nightmare. While nuclear science improves our everyday lives—from medicine to microwave technology—radiation’s invisible powers can trigger cancer and cellular mayhem. Writing with a biographer’s passion, Craig Nelson unlocks one of the great mysteries of the universe in a work that is tragic, triumphant, and above all, fascinating.

From the discovery of X-rays in the 1890s, through the birth of nuclear power in an abandoned Chicago football stadium, to the bomb builders of Los Alamos and the apocalyptic Dr. Strangelove era, Nelson illuminates a pageant of fascinating historical figures: Marie and Pierre Curie, Albert Einstein, Niels Bohr, Franklin Roosevelt, J. Robert Oppenheimer, Harry Truman, Curtis LeMay, John F. Kennedy, Robert McNamara, Ronald Reagan, and Mikhail Gorbachev, among others. He reveals how brilliant Jewish scientists fleeing Hitler transformed America from a nation that created lightbulbs and telephones into one that split atoms; how the most grotesque weapon ever invented could realize Alfred Nobel’s lifelong dream of global peace; and how, in our time, emergency workers and low-level utility employees fought to contain run-amok nuclear reactors while wondering if they would live or die.

Radiance defies our common-sense views of nature, with its staggering amounts of energy flowing from seemingly inert rock and matter pulsing in half-lives that transforms into other states over the course of decades or in the blink of an eye. Radiation is as scary a word as cancer, but it’s the power that keeps our planet warm, as well as the force behind earthquakes, tsunamis, and volcanic eruptions, and so organic to all life that even our own human bodies are radioactive. By tracing mankind’s complicated relationship with the dangerous energy it discovered and unleashed, Nelson reveals how atomic power and radiation are indivisible from our everyday lives.

Brilliantly told and masterfully crafted, The Age of Radiance provides a new understanding of a misunderstood epoch in history and restores to prominence the forgotten heroes and heroines who have changed all of our lives for better and for worse. It confirms Craig Nelson’s position as one of the most lively and skillful popular historians writing today.