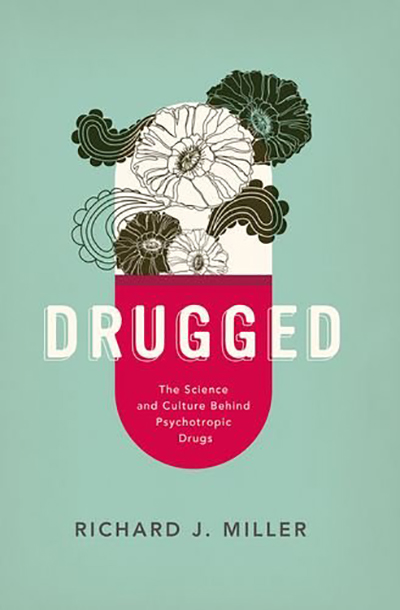 Synopsis: “Morphine,” writes Richard J. Miller, “is the most significant chemical substance mankind has ever encountered.” So ancient that remains of poppies have been found in Neolithic tombs, it is the most effective drug ever discovered for treating pain. “Whatever advances are made in medicine,” Miller adds, “nothing could really be more important than that.” And yet, when it comes to mind-altering substances, morphine is only a cc or two in a vast river that flows through human civilization, ranging LSD to a morning cup of tea.

In DRUGGED, Miller takes readers on an eye-opening tour of psychotropic drugs, describing the various kinds, how they were discovered and developed, and how they have played multiple roles in virtually every culture. The vast scope of chemicals that cross the blood-brain barrier boggle the very brain they reach: cannabis and cocaine, antipsychotics and antidepressants, alcohol, amphetamines, and Ecstasy-and much more. Literate and wide-ranging, Miller weaves together science and history, telling the story of the undercover theft of 20,000 tea plants from China by a British spy, for example, the European discovery of coffee and chocolate, and how Johann Wolfgang von Goethe, the famous man of letters, first isolated the alkaloid we now know as caffeine. Miller explains what scientists know-and don’t-about the impact of each drug on the brain, down to the details of neurotransmitters and their receptors. He clarifies the differences between morphine and heroin, mescaline and LSD, and other similar substances. Drugged brims with surprises, revealing the fact that antidepressant drugs evolved from the rocket fuel that shot V2 rockets into London during World War II, highlighting the role of hallucinogens in the history of religion, and asking whether Prozac can help depressed cats.

Entertaining and authoritative, Drugged is a truly fascinating book.

Mini-bio: Richard Miller is Alfred Newton Richards Professor of Pharmacology at Northwestern University. He has authored or co-authored more than 400 papers and journal articles on molecular pharmacology and biological chemistry. – OUP|USA Website