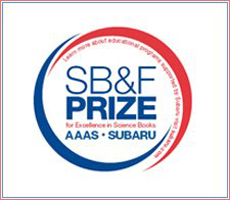 The winners of the 2014 AAAS/Subaru SB&F Prizes for Excellence in Science Books were announced on the 24th of January 2014.

“The 2014 prizes recognized efforts in four categories: Children’s Science Picture Books, Middle Grades Science Books, Young Adult Science Books, and Hands-on Science Books. In addition, a special prize was awarded to the Scientists in the Field series of books, published by Houghton-Mifflin Harcourt. Winners will receive $1500 and a plaque on 15 February during the 2014 AAAS Annual Meeting in Chicago.”

“Finalists were selected by a group of judges made up of librarians, scientists and science literacy experts. Out of nearly 165 books up for consideration across all four categories, the judges selected 13 finalists, the largest number since the inception of the prizes.”

At Science Book a Day we will try our best to feature the following winners and nominees over the coming weeks 🙂 But for now, the winners are:

It’s Our Garden: From Seeds to Harvest in a School Garden By George Ancona

Writer and photographer Ancona shares his fascination with a school garden near his home in Santa Fe, New Mexico. Over the course of a year he photographed the students, their friends, teachers and family as they tended to the garden from seed to harvest. In the best of scientific traditions, students plan, do, observe and record. Ancona’s photo essay is graced with the students’ drawings of the plants, the insects that keep the garden thriving and the wildlife that calls the garden home.

The Skull in the Rock By Lee R. Berger and Marc Aronson

When nine-year-old Matthew Berger showed his father, paleoanthropologist Lee Berger, a fossil he found in South Africa, a remarkable journey of scientific discovery was launched. It turned out to be a nearly complete fossil skeleton of a previously unknown species, Australopithecus sediba (a major find in the hominid tree). In this book Berger and co-author Aronson bring the story of this important discovery to young readers. The authors offer step-by-step explanations of paleontological techniques using photographs from the field and laboratory.

In Frankenstein’s Cat, journalist Emily Anthes takes readers from “petri dish to pet store” in her succinct summary of how humans have developed and used technology over the past decade to modify other animals for their own purposes. This extremely accessible book presents both sides of the ethical debate about the impact of these technologies on the animals. Students who read this book will be left with not only a clear grasp of its subject matter, but also an excellent exemplar on how to develop an argument from evidence.

Look Up!: Bird-Watching in Your Own Backyard By Annette LeBlanc Cate

This engaging introduction to bird watching encourages kids to get outdoors with a sketchbook and really look around. Quirky full-color illustrations portray dozens of birds chatting about their distinctive characteristics, including color, shape, plumage, and beak and foot types. Interactive and enjoyable tips bring an age-old hobby to new life for the next generation of bird-watchers.

In 2014, AAAS recognizes the Scientists in the Field series as an Outstanding Science Series, an accolade awarded only once before as part of the AAAS/SubaruSB&F Prizes. Published by Houghton Mifflin Harcourt, the Scientists in the Fieldseries offers young people ages 9 to 14 close-up views of scientists at work. Since 1999, 40 beautifully designed Science in the Field books have explored a broad array of topics, profiling scientists as they observe gorillas, study volcanic eruptions, reconstruct prairies, track polar bears, climb redwoods, guide the Mars rovers, swim with sharks, fly into hurricanes, search for extraterrestrial intelligence, and try to solve the mysteries posed by dwindling populations of frogs, bats, and honey bees.

[The above was adapted from the AAAS/Subaru announcement.]