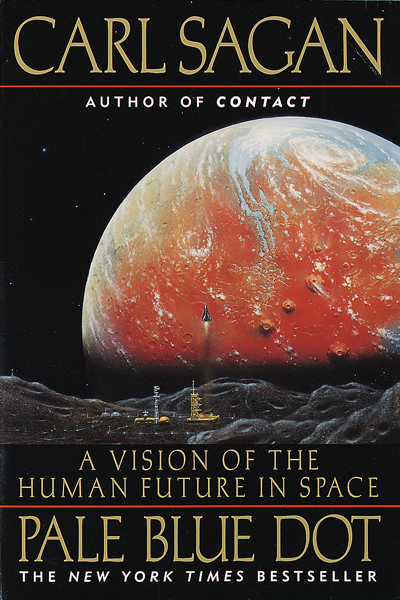 Pale Blue Dot: A Vision of the Human Future in Space by Carl Sagan

Synopsis: In Cosmos, the late astronomer Carl Sagan cast his gaze over the magnificent mystery of the Universe and made it accessible to millions of people around the world. Now in this stunning sequel, Carl Sagan completes his revolutionary journey through space and time.

Future generations will look back on our epoch as the time when the human race finally broke into a radically new frontier–space. In Pale Blue Dot Sagan traces the spellbinding history of our launch into the cosmos and assesses the future that looms before us as we move out into our own solar system and on to distant galaxies beyond. The exploration and eventual settlement of other worlds is neither a fantasy nor luxury, insists Sagan, but rather a necessary condition for the survival of the human race.

Pale Blue Dot: A Vision of the Human Future in Space is a 1994 book by Carl Sagan. It is the sequel to Cosmos and was inspired by the famous Pale Blue Dot photograph, for which Sagan provides a poignant description. In this book, Sagan mixes philosophy about the human place in the universe with a description of the current knowledge about the Solar System. He also details a human vision for the future. – Wikipedia

“Consider again that dot. That’s here, that’s home, that’s us. On it everyone you love, everyone you know, everyone you ever heard of, every human being who ever was, lived out their lives.” I read this book when I was a teenager, and while I don’t remember all the details now, I do recall how I felt when I read those words (mostly relieved that other people – older, wiser, more accomplished people – spent time thinking about these things too). In Pale Blue Dot, Sagan guides us through sadness and inspiration: sadness at our fragility, petty obsessions and loneliness in a vast universe; and inspiration at humanity’s need to explore, journey and discover. This book is probably an obvious choice to include on a list like this, but very few people can match Carl Sagan’s ability to tell inspiring stories about, and with, science. – 10 Great Books on Space