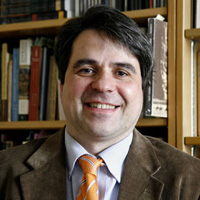 Special thanks to Christoph Irmscher for answering 5 questions about his recently featured book – Louis Agassiz: Creator of American Science

Christoph Irmscher lives in Bloomington, Indiana. Christoph teaches English at Indiana University, where he also directs the Wells Scholars Program. He is now writing a biography of Max Eastman. – Adapted from Christoph’s Homepage

#1 – What was the impetus for Louis Agassiz: Creator of American Science?

​The inspiration for this book came from my earlier biography of the poet Henry Wadsworth Longfellow, one of Agassiz’s closest friends (Longfellow Redux, 2006), As I was working through Longfellow’s papers, I found notes and letters that spoke of their mutual admiration. In fact, Agassiz was revered by poets, scientists, politicians, and ordinary citizens alike. He wanted science to be part of the general fabric of culture, to be “woven into the common life of the world,” as he put it, and he really succeeded in generating public conversations about science in his own day. He was a larger-than-life figure, and I was fascinated by the fame he enjoyed during his life and the rapid decline of his reputation after his death. Given that science and the humanities are often referred to as the two cultures, it seemed interesting to me that for Agassiz at least that separation did not exist. And I liked the complexity of Agassiz as a historical figure. Then there was the enormous archive of Agassiz papers, at Harvard and elsewhere–so many letters, notes, articles, drafts by Agassiz, in French, German, and English. And what a remarkable story: he was an immigrant from Switzerland who came to the United States in 1846 without any funds of his own–and within a few years he virtually controlled American science.

#2 – Agassiz was a huge figure in his time. Why is he not as well known around the world as contemporaries such as Charles Darwin?

​Agassiz was on the losing side in the debate about evolution. His theories were mostly wrong, rooted in an outmoded conception of natural history that assumed that species had been created where they could be found today. His virulent pontifications on race did not help either. As a polygenist he believed, against all evidence to the contrary, that there were biological differences between the races–a view that even the slaveholders among his colleagues (such as John Bachman in South Carolina) knew was absurd. While many scientists have had unappealing political opinions, Agassiz voiced them publicly and enjoyed his role as an “expert” on the future of race relations in the United States, advocating segregation just as the nation was recovering from the trauma of the Civil War.

#3 – A review says that your of biography “there’s no airbrushing” in relation to Agassiz. Was that important to your portrayal of this historical figure?
​
Much biographical work today is in the ​recuperative work: let’s find some wonderful people in the past whose lives are worthy of our consideration today, lives that resemble or anticipate the way we would like to think we live our lives today: enlightened, free of the burdens of the past. Agassiz doesn’t allow us such a comforting approach. He was one of the smartest men of his time and he said some incredibly stupid things. He was a genius and a fool, both immensely appealing and appalling, good and evil, a kind of affable monster, a man perhaps more fallible than most. The fact that so many liked him in his lifetime tells us more about how the past really was than attempts to show how much ahead of his time Charles Darwin was. I felt an ethical responsibility to represent Agassiz as accurately as possible and to demonstrate how many of his more reprehensible opinions were shared by his contemporaries, among them Ralph Waldo Emerson or Abraham Lincoln.

#4 – What would you say would be Agassiz’s legacy in modern science?

​Agassiz’s most enduring contribution was perhaps in the field of glaciology. While the “ice Age” was not a term he coined, he made the concept and methods of glaciological research familiar to wider audiences. He pioneered the use of field work in science –“study nature not books,” was his personal motto, which is still displayed in the library of the Marine Biological Laboratory at Woods Hole. He would take his students outdoors in order to “catch nature in the act,” as he beautifully put it. And he vigorously encouraged women to pursue scientific work: more than a dozen of the participants in the Anderson School of Natural History he organized in 1873 on Penikese Island, off the coast of Massachusetts, were women. He trained an entire generation of American scientists, among them some of the leading figures associated with the early years of Woods Hole: Cornelia Clapp, Alpheus Hyatt, Charles Otis Whitman, and William Keith Brooks. And if his students, including his own son, the brilliant oceanographer Alexander Agassiz, distanced themselves from his theoretical views, they were still the beneficiaries of his methods.

#5 – Are you working on any new projects/books you can tell us about?

​I am working on several projects, at least one of them related to Agassiz: I am editing his ​early lectures, Introduction to the Study of Natural History, for Springer Publishers. I am also collaborating on a book about another one of my obsessions, John James Audubon, with my art historian friend and colleague, Alan Braddock. And by the end of the year, I hope to have finished a first draft of a new biography of Max Eastman (1883-1969), a poet, socialist, editor, translator, and journalist, who thought that the biggest compliment anyone had ever paid him was his inclusion in the 1956 edition of Cattell’s directory of American Men of Science.​ In between working on the lives of other people, I have also been reconstructing my own immigrant life, in the form of short prose vignettes based on old family photographs (tentative title, Borrowed Words).