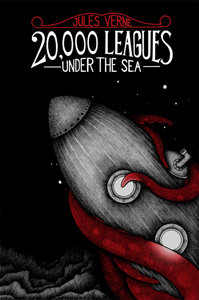 Synopsis: Professor Aronnax, his faithful servant, Conseil, and the Canadian harpooner, Ned Land, begin an extremely hazardous voyage to rid the seas of a little-known and terrifying sea monster. However, the “monster” turns out to be a giant submarine, commanded by the mysterious Captain Nemo, by whom they are soon held captive. So begins not only one of the great adventure classics by Jules Verne, the ‘Father of Science Fiction’, but also a truly fantastic voyage from the lost city of Atlantis to the South Pole.

Book’s Wiki Entry
Author’s Mini Bio: Verne is generally considered a major literary author in France and most of Europe, where he has had a wide influence on the literary avant-garde and on surrealism. His reputation is markedly different in Anglophone regions, where he has often been labeled a writer of genre fiction or children’s books, not least because of the highly abridged and altered translations in which his novels are often reprinted. Verne is the second most-translated author in the world since 1979, between the English-language writers Agatha Christie and William Shakespeare, and probably was the most-translated during the 1960s and 1970s. He is one of the authors sometimes called “The Father of Science Fiction”, as are H. G. Wells and Hugo Gernsback. – Wikipedia